The Mayor of London Sadiq Khan has urged the likes of Arsenal, Tottenham and Chelsea to contribute more towards funding for matchday policing.

The Daily Telegraph reported that Khan had written a letter to Richard Scudamore, the chief executive of the Premier League, outlining the need for Premier League to increase their contribution. 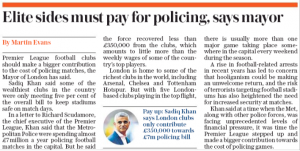 Security at football grounds is highly important, especially now that they could be the target of terrorist attacks.

There was also a rise football-related arrests last year, which has sparked fears that football hooliganism could be on the up again.

The police have found themselves stretched for various reasons. While we won’t propose a solution, Premier League clubs should do all they can to ensure that going to a match is as safe an experience as possible.

Martin Odegaard wants another goal in the North London derby

Takehiro Tomiyasu already topping the league in one statistic

Dates set: Arsenal’s next 9 games picked up for TV coverage

Tobin Heath: I never thought I’d play for Arsenal, the club I love