Barcelona could still reportedly have to pay Arsenal an additional €3.5m for Thomas Vermaelen.

It was a pretty hilarious deal since, although the centre-back was loved by Arsenal fans, he wasn’t the best defender and, let’s face it, his legs were made out of paper.

In fact, Verm’ has only made 21 appearances in total for Barca’s first team, and featured just 12 times during his season-long loan at Roma last term.

According to Spanish outlet, Mundo Deportivo, the situation is about to get more amusing from an Arsenal perspective as the Catalan giants may have to pay the Gunners another €3.5m for the 31-year-old, despite the deal happening three years ago. 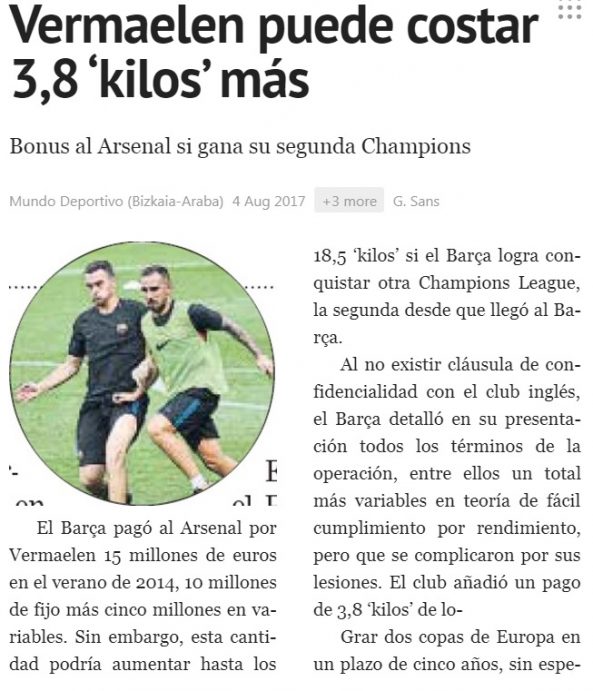 This amount could increase to €18.5m if the La Liga club win the Champions League this season. It’ll be their second in the five years since Vermaelen joined them and apparently a €3.5m bonus was added in this eventuality.

Despite the Belgium international only making one 63-minute appearance during the 2014/15 season due to a thigh injury, apparently there wasn’t anything in the contract specifying that he had to make a certain amount of appearances for it to count.

This will give Barca even more motive to sell Verm’ as the last thing they probably want to have to do is pay Arsenal more money for a player they’ve hardly used.

Roma were linked with a permanent move for the defender but they’re reportedly not interested. At least not anymore.

Report: Ramsdale to start against Burnley, Leno against Spurs

Marc Overmars says he would choose Barcelona over Arsenal

Why Aaron Ramsdale started for Arsenal against Norwich not Bernd Leno