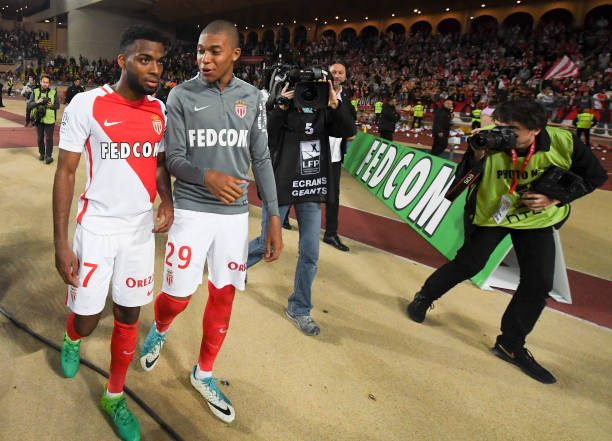 Monaco manager Leonardo Jardim has admitted that he’s unsure whether the likes of Kylian Mbappé and Thomas Lemar will remain at the club, due to their transfer ‘project’.

Arsenal are keen to sign the attacking duo this summer, though it’s increasingly likely that they’ll have to significantly increase their offers to persuade Monaco to sell.

Having won Ligue 1 last season, as well as reaching the UEFA Champions League semi-finals for the first time since 2000, Monaco are in a position where many of the big sides are keen to snatch their key stars.

Monaco’s decision three years ago to focus on developing and promoting their academy talents has ultimately paid off, with their value maximised as a result of the success they’ve enjoyed.

Jardim told French radio station RMC that the club’s business model is not set to change, which could make it increasingly difficult to retain their main stars.

“I hope to keep the right players,” ESPN quotes the 42-year-old as saying.

“It is not just me, all the coaches of the world [would] like to keep the best players. But with the Monaco project, maybe it’s not possible to always keep the best. We’re going to look at what’s going to happen.

“Three players left. Other players could leave us. Everyone knows our project. It did not change even if we have won the title. The project is the same. The goal is still win, nothing has changed.”

Monaco’s league triumph last season was the first time that PSG haven’t won the title since 2011-12 and Jardim is already focused ahead of the new campaign, where they’ll have a target on their backs.

“It’s very important for us. What matters is the training of the young players and the quality of our game. The only thing that changes is that we are going to start the season being the defending champions.”

Kylian Mbappé’s future at the club is still uncertain as he’s yet to sign their tabled contract extension with both Real Madrid and Arsenal highly interested. However, the manager himself is optimistic that his prized asset will remain in France.

“I have not spoken to him [Mbappé], because he knows how we work, that we want to keep him. I think the club and he will make the best decision.”

The club’s project is a long-term one and given their recent success, suggests that high transfer fees earned from player sales can continue to significantly benefit the club’s Academy prospects going forward, with the aim of replicating this in future seasons.