Alexandre Lacazette will meet with the president of Lyon today (Monday) to tell the club that he has agreed a five-year deal with Arsenal according to reports in L’Equipe this morning.

The transfer really kicked off over the weekend and it seems as if the two clubs are very close to agreeing a fee which will be in the region of €50m for the forward. 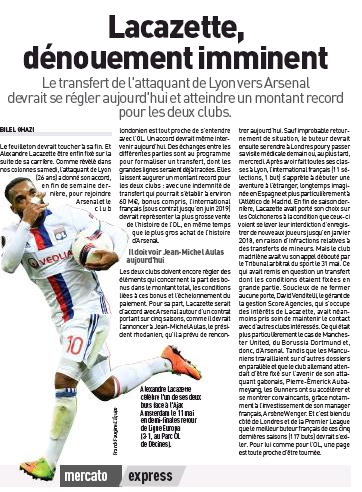 L’Equipe expect an agreement to be reached between the two clubs today with the transfer fee expected to rise to as much as €60m with bonuses included.

They add, “The two clubs still need to adjust items, which refer to the proportion of bonus in the total amount, the terms and conditions related to these bonuses and the timing of the payment. For its part, Lacazette would agree with Arsenal around a contract for five seasons, as he should announce to Jean-Michel Aulas, the president rhone valley, that he planned to meet today.”

Lacazette’s medical is expected on Tuesday or, at the latest, Wednesday, despite reports at the weekend claiming it had already taken place.

No contact from Arsenal for Edouard yet despite reported interest

What Arsenal players are out of contract next summer?

AS Roma looking to come back for Kolasinac in January

Özil expected to miss out on Premier League squad as well