Arsenal have released shirt numbers for the 2017/18 season……..on the club shop website……

Arsenal have updated the website with all the new numbers, the main point of interest of course being new signing Alexandre Lacazette. As per Arsenal Direct, below are all the currently revealed squad numbers: 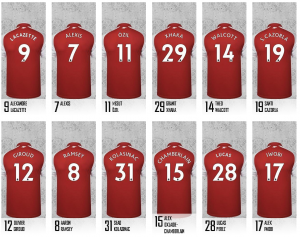 Club-record signing Alexandre Lacazette gets the number nine jersey, as predicted and hoped for by most fans on Twitter. Lucas Perez, the previous owner, has been moved to number 28.

Joel Campbell was the previous owner of that shirt but hasn’t hads another assigned to him as of yet. It’s a similar story with fellow loanees Wojciech Szczęsny, Jack Wilshere and Calum Chambers. Their numbers will presumably be decided if and when it’s confirmed they’re not heading off on loan again, or exiting on permanent deals.

Other summer signing Sead Kolašinac has been given the number 31, as previously announced. Mesut Özil keeps the number 11 jersey, but with Jack Wilshere’s number 10 yet to be confirmed on the website, this could still change.