“I think I was made for the English league. I will fight as long as I have to and give everything I have until I eventually play in the top flight.”

Despite the desire and courage required to leave his home town in 2009, Mustafi only achieved his dream of playing in England’s highest tier in 2016.

The road was neither smooth nor straight.

The young German defender plied his trade in Germany’s youth league, England’s reserve league, the fair city of Genoa and the port city of Valencia before finally returning to England and signing for Arsenal. 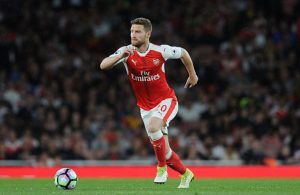 At the relatively young age of 25, Mustafi has endured a lot.

Although born in Germany, his ancestry lies firmly in Albania where his grandfather and father were born. Unlike most professional footballers, Mustafi had to bide his time before joining the youth team of a major club. He was the ripe old age of 14 when he signed for Hamburg – a number of years behind most of his contemporaries.

However, the German didn’t say long.

In 2009, the fledgling defender opted to ply his trade in England – believing that his skillset was well suited for the English league.

Although he was applauded for his bold step, Mustafi failed to start a single top flight game – instead honing his skill in the division’s reserve league. The German stayed for the entirety of his contract, declaring Goodison his home.

Despite the warm feeling of Liverpool, no amount of scouse (a meaty broth similar to Irish stew) and Beatle’s music could offset his lack of game time.

In 2012, Mustafi travelled as a free agent to the city of Genoa where he signed for recently relegated Sampdoria.

Though signed in January, the 6ft defender had to wait until May to make his maiden appearance: with concerns over his experience, the nature of the competition and the encumbrance caused by his inability to converse in Italian.

However, the one-time Scudetto champions were reinstated on their first attempt and although he featured infrequently, the young German defender was set to embark on an education in the institution of defending. Mustafi went on to make 18 appearances the subsequent season, not enough in his eyes but valuable playing time that he was thankful for.

The following season, Mustafi became a key component of an exceptional Sampdoria side that included the talented Mauro Icardi, Andrea Poli and Simone Zaza. With their help, the Italian side went on to successive mid-table finishes before being disbanded for significant transfer fees.

At the close of the season, Mustafi was shocked to find himself selected for the 30 man provisional squad for the World Cup in Brazil. Having only recently been selected for a friendly against Chile, in which he spent the entire 90 minutes on the bench, Mustafi was sceptical about his chances of making the final 23 man squad.

His suspicions were correct after the announcement of the squad saw him fall just short. However an unfortunate injury to playmaker Marco Reus saw Mustafi earn an unexpected call up at the last minute. In his first competitive national competition, Mustafi completed the ultimate dream of winning the World Cup. With spirits high, and the German’s stock rising rapidly – Sampdoria decided to cash in on their young defender to the tune of €8million. 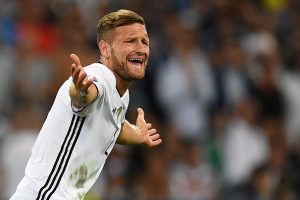 Although Zaza, Poli and Icardi all remained in Italy, Mustafi continued to test his mettle by moving to the home of the Europa League semi-finalist: Valencia. In his first season, Mustafi cemented his position at the heart of Los Che’s backline and helped the team climb back into Europe with a fourth place finish. Unfortunately his second season was not as successful, as Valencia struggled to reclaim a Champions League place and were humiliated in the Copa del Rey at the hands of Messi et al in a 7-0 drubbing.

Despite his own calamitous performance in that game, Mustafi appealed to his teammates to seek forgiveness from their fans in the forthcoming displays. However, the German’s appeals fell on deaf ears as the club went on to lose 6 of the 9 ensuing games. Although there were wins over league champion’s Barcelona, Europa League champion’s Sevilla and an honourable draw away from home against second placed Real Madrid, Valencia continued to plummet and ended the season a mediocre 12th.

Following an injury to Arsenal’s German centre half: Per Mertesacker, Mustafi was faced with the prospect of returning to a country where he shared both fond and frustrating memories. Despite the difficulties he suffered in Liverpool, the German completed a deal believed to be in excess of £35million in late August.

Since then he has gone on to become a key component and a central figure in the Arsenal team and squad. At the age of 25, there seems to be plenty of time for Mustafi to fulfil his and Arsenal’s ambitions.

Whilst his journey to Arsenal may have been the making of him, one would hope his time here will be his crowning glory.