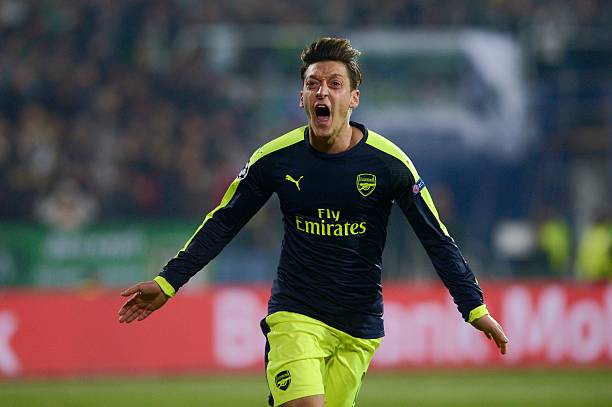 Mesut Özil’s magical strike against Bulgarian side Ludogorets has been voted as the UEFA Champions League’s best goal of the tournament this season.

The 28-year-old German netted the goal during a frenetic 3-2 away victory during the Group A fixture at the start of November.

What makes it all the more impressive is the timing of the finish, with just three minutes left on the clock in a match that could’ve gone either way after a disastrous start saw Arsenal concede twice in the first 15 minutes.

With 57% of the vote, you have chosen Mesut Ozil's bit of magic against Ludogorets as your 2016/17 #UCL Goal of the Tournament! 🙌 🔥 pic.twitter.com/OJMju9XHVn

Goals from Jonathan Cafu and Claudiu Keșerü helped the hosts race into a two-goal lead before Granit Xhaka halved the deficit shortly afterwards. Olivier Giroud levelled the scoring just before the half-time interval and despite Arsenal’s dominance in the second-half, it seemed as though PSG would leapfrog them to top spot.

Özil’s level of composure and individual skill was on display for all to see as he latched onto Mohamed Elneny’s probing pass before chipping the ball over goalkeeper Milan Borjan, avoiding two attempted sliding blocks with a deft dummy before slotting home from close-range.

Here it is again in all its glory…

Although Özil later revealed it was probably the best goal he’s scored in his career, he and the rest of the Arsenal side didn’t have any success once they qualified for the last-16 as group winners, as Bayern’s infamous 10-2 aggregate victory against the Gunners knocked them out once again.

Unsurprisingly then, some on social media were keen to poke fun at the fact that Arsenal hadn’t made significant improvements in their attempts for Champions League glory, so had to win something else as a result.

Although criticism was inevitable, we can only hope for more memorable moments like that in the near future from Özil and his Arsenal team-mates.