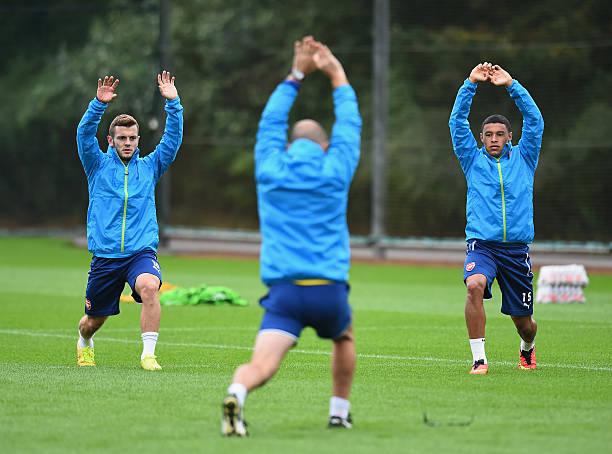 Arsenal are looking to offer three new deals to their British core, though one remains an uncertainty according to recent reports.

Aaron Ramsey, Alex Oxlade-Chamberlain and Jack Wilshere have all been linked with a possible move away from the Emirates at some stage over the past few seasons now.

Whether that be because of injury problems, a lack of regular minutes or a change of scenery elsewhere in Europe, it’s fair to say that the midfield trio will be keen to have their futures sorted out sooner rather than later this summer.

The Ox has been one of Arsenal’s best players this past season whilst Aaron Ramsey has looked more impressive since Wenger’s tactical change to a 3-4-2-1 provided the Welshman more creative freedom.

Jack Wilshere on the other hand, was enjoying a fairly successful loan spell at Bournemouth before sustaining a fractured leg during their 4-0 drubbing away against Tottenham in the middle of April.

Currently in Dubai recovering, his warm-weather training trip has been funded by the club but many feel as though at 25, this could very well be the end for Wilshere’s injury-hit career in north London.

Wenger has already revealed that he needs to trim the first-team squad this summer with a number of departures expected. If they cannot agree terms over a new contract, the club will have to sell Wilshere rather than lose him on a pre-contract agreement next year.

All three have a year remaining on their existing deals and though it’s clear that Arsenal want the aforementioned duo to stay, Wilshere’s situation is proving a difficult one to justify.

Kieran Gibbs’ future at the club is also uncertain, though it’s possible that he’ll leave in search of regular first-team minutes elsewhere in the Premier League with Newcastle interested.