Arsenal’s professional and drama-free away display earned them their first league win at St Mary’s since Southampton’s return to the top flight in 2012/13.

The Gunners don’t control their own destiny in the hunt for the final Champions League spot and require help from elsewhere, but all they can do is keep winning their own games, applying the pressure, and hoping City, or more likely Liverpool, slip.

This is fine, so long as your goalkeeper and seven deepest outfield players remain focused, and you can get the ball forward to alleviate pressure and allow them time to regroup.

While Arsenal were able to get the ball to their front three to relieve the pressure on the defensive unit, they weren’t overly effective as an attacking force and are still very much coming to terms with the new system.

As the new system was adopted to give better collective security to the back seven, you have to say that it has fulfilled its initial primary purpose. The attacking returns will come as the players grow more familiar with it. The 3-4-2-1 is a version of the safety first approach that many fans were crying out for during the season’s darkest days.

Speaking after the win over United, Arsene Wenger said that he felt Alexis Sanchez played a little too deep for his liking and didn’t offer enough support to Danny Welbeck. This was again the case against Southampton, as demonstrated by the areas in which he received the ball. He played no closer to the striker than he did on Sunday. 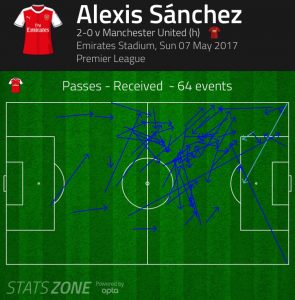 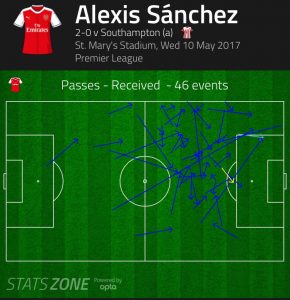 The Chilean was largely ineffective throughout the first hour of the match, not playing in areas where he could influence the match as his manager would have wanted him to. However, as has been typical over the past couple of months, he came to life at the flick of a switch, and combined brilliantly to score the opener after some swift combination play to progress the ball up the pitch from Arsenal’s left-footed spine, going through Cech, Nacho Monreal, Mesut Özil, and Granit Xhaka. 20 seconds passed between Cech rolling the ball out to Monreal and it hitting the back of Fraser Forster’s net.

Another player still coming to terms with his role in the system is Danny Welbeck, who all quantifiable measures will tell you was again cut somewhat adrift of what was going on behind him. 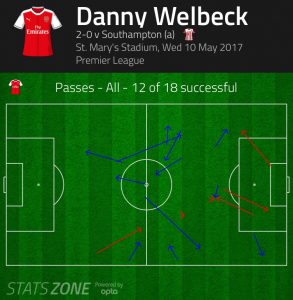 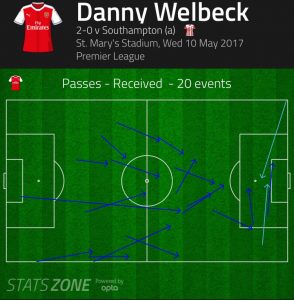 However, while his tangible output may appear meagre, his pace and movement posed problems for the Southampton defence as it created openings and opportunities for teammates.

Unlike Alexis and Welbeck, Aaron Ramsey has thrived in the new system. Arsenal’s most intelligent off the ball runner has looked back to his most threatening since the formation switch. As discussed previously on this site, Xhaka partnering him and having an extra centre back behind him has liberated the Welshman and allowed him to fully commit to his runs from deep.

While the opposition focus is primarily on what Alexis and Özil are doing, Ramsey is often left free to run untracked from deep and get into dangerous areas, as he did many times on Wdnesday night, most productively to head back across goal to assist Olivier Giroud’s match clinching goal at the death.

That Ramsey still had the energy to make lung-bursting runs that late in a second match in four days is commendable and testament to his engine. However, praise for him centring on just his engine would be wrong and reductive, as there is so much more to his game than that.

As the last few weeks and his performance for Wales at Euro 2016 clearly indicate, Ramsey is an excellent central midfielder, who can be devastatingly effective when played in a functioning system where everyone does what they’re told to, at the level that’s expected of them, and alongside an appropriate partner who he dovetails well with.

In the current system, he thrives as one of the central midfielders alongside a Xhaka type, and his performances for Wales further up the pitch suggest he can be lethal in one of the more advanced positions should an opening arise there over the summer. A case could be made for how he’s the player Arsenal can least afford to lose.

Another player who has impressed since the formation switch is Petr Cech. Since returning from his injury, he has consistently performed at the level everyone at Arsenal expected from him when he signed from Chelsea in the summer of 2015. He looked assured, confident, and made big saves when called upon. His distribution of the ball from restarts, which was alarming at times in the first half of the season, has also improved considerably since the formation change and redistribution of bodies around the pitch.

The one negative about last night’s match was Alex Oxlade-Chamberlain limping off with a tight hamstring. The Ox has spoken in the past about the heartache of missing the 2014 cup final through injury and only came on with a minute plus stoppage time to play in 2015. 18 days to recover from a hamstring is going to be cutting it fine. Another issue this poses is that Hector Bellerin will be required to play all of Arsenal’s remaining matches on an ankle that already needs to be surgically repaired in the summer.

Arsenal now go on to play at Stoke on Saturday evening, where a first win since 2010 would take them to within a point of Liverpool, who travel to West Ham on Sunday lunchtime.

Stoke have been indifferently existing in midtable purgatory for some weeks now, but always save something special for Arsenal and have no time for sentiment even when there is nothing for themselves to play for, as they demonstrated when they ruined Steven Gerrard’s farewell with a 6-1 win.

While Wenger may be tempted to view this match as ‘One For Giroud’, Arsenal may be better served going in with Welbeck’s pace up top to get in down the sides of Stoke’s lumbering centre backs, learning from the selection error at Spurs.