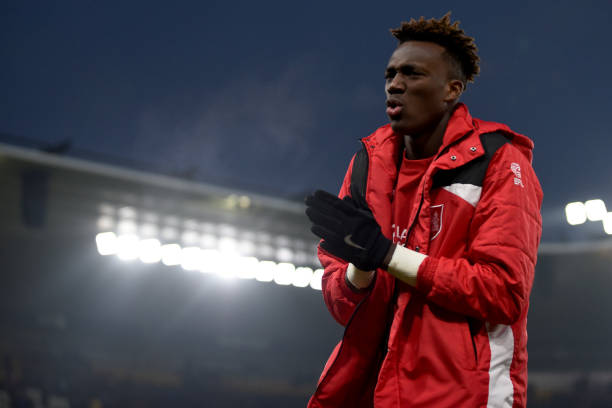 According to a report in the S*n today, Arsene Wenger is interested in signing Tammy Abraham.

The 19-year-old forward, currently contracted to Chelsea, is apparently “prepared to quit Stamford Bridge“, if he’s not given first-team assurances by Antonio Conte ahead of the 2017/18 campaign.

Having scored 26 (23 in the Championship) goals on-loan at Bristol City this season, Tammy’s stock has unsurprisingly risen significantly since last summer’s loan switch was completed. Bristol finished in 17th place and were only three points away from relegation to League One, so the youngster’s goal contribution proved pivotal in helping keep Lee Johnson’s side up.

Abraham joined Chelsea as an u8 player in 2004 and has developed significantly through Academy ranks, especially in the last few seasons. It’s no surprise then that he was given his loan opportunity to shine away from youth level, where players like himself and Dominic Solanke flourished beforehand – he’s scored over 25 goals in all competitions over the past three seasons now.

Having already broken the record for most goals of any teenager in the Championship over the last 20 years, it was a surprise that he wasn’t nominated for any PFA Player of the Year or Team of the Year accolades, especially given his achievements in a struggling Bristol City side.

Nonetheless, many sides have been interested in signing him on temporary deals.

Derby, Newcastle, Brighton and Galatasaray are just a few of the sides that have been linked in recent months but Arsenal are hopeful that they can take advantage of his current situation by making a move to persuade him to leave on a permanent basis.

Patrick Bamford and Dominic Solanke are prime examples of talented prospects whose development has stagnated at Chelsea due to a range of different issues – mainly not being given a chance in the first-team. If Abraham feels as though he will be the next to have the same fate, he’d be interested in a move away without having the pressure to return to Stamford Bridge.

The fact that they’ve been linked with the likes of Celtic’s Moussa Dembélé doesn’t bode well for his aspirations for regular minutes under Conte, especially given how sparingly £33m signing Michy Batshuayi has been utilised this season too.