After seemingly being set for Arsenal this summer, Bild [Via Milan News] are now allegedly reporting that Sead Kolasinac is ready to surprise everyone again by coming to a pre-agreement with Manchester City worth €140,000 per week (£118k).

The defender, who is available for free this summer, has been heavily linked with Arsenal with reports even claiming that he had a medical in London. Bosnian media sent everyone into a frenzy when they first said the player had signed with Arsenal but it seems like they went far too early. 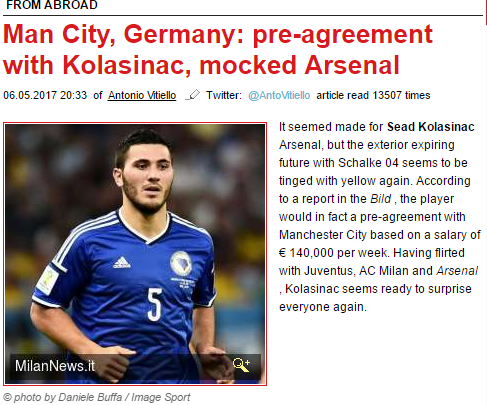 Arsenal are also supposed to have offered Kolasinac €140k per week, before add-ons, and the player was said to want to play with either Mesut Ozil and Granit Xhaka or Leory Sané and Sergio Aguero.