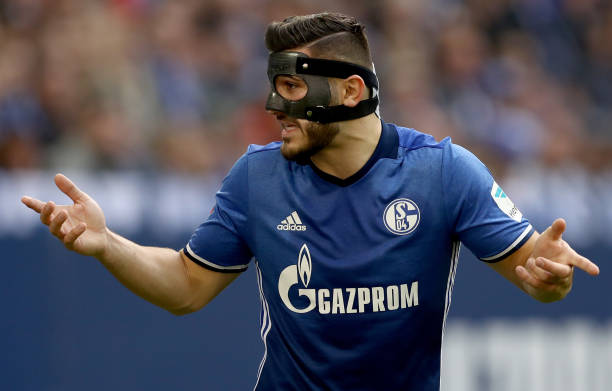 This upcoming transfer window promises to be an important one for Arsenal as they look to strengthen significantly with a summer overhaul plan in place, and a recent article has already taken a look at how the Gunners’ first-team squad could look with business being completed in multiple areas.

Failure to qualify for next season’s UEFA Champions League could prove pivotal in negotiations stalling for their more important first-team players, including Alexis Sánchez, Mesut Özil and Alex Oxlade-Chamberlain. All three have a year remaining on their existing deals and could be persuaded to move elsewhere in the upcoming transfer window.

Alexis’ possible departure could be finalised if he makes clear his desire to leave, and clubs outside of England make bids that force Arsenal to consider selling. The transfer fee itself would be around £40-50m, whilst Mesut Özil wouldn’t leave for less than £40m either. Liverpool’s reported pursuit of The Ox hasn’t died down either, with a £25m price-tag the current value that the Reds are set to consider.

Elsewhere: Carl Jenkinson, David Ospina, Jack Wilshere, Lucas Perez and Kieran Gibbs would attract offers in the region of £60m total, which would boost the club’s transfer funds even further.

Sead Kolasinac will officially become an Arsenal player at the start of July, having agreed a deal to join on a free transfer from Bundesliga side Schalke. Gibbs only has a year left on his existing contract and as a result, the experienced Englishman is keen to play regularly. It’s unlikely as a result that he’ll remain for much longer.

The dream signing, and one that Wenger revealed he missed last summer. Monaco’s breakthrough star Kylian Mbappé has a hefty price-tag on his name but it’s clear that he has Europe’s best all interested.

The 18-year-old wants first-team assurances wherever he decides to play next term, and that will give Arsenal a boost over their rivals, who Wenger admitted could price them out of a move for the exciting French forward.

Although not seen as a necessity, both Sunderland’s Jordan Pickford and Southampton centre-back Virgil van Dijk could also join the club this summer.

The latter has been heavily linked with a lucrative move to either Chelsea, Manchester City or Liverpool in recent months and it’s increasingly unlikely that he’d leave to play in the UEFA Europa League next season – but money talks and if Arsenal are prepared to make promises, they could persuade him to choose them over the aforementioned trio.

Sunderland rate Pickford very highly and for good reason too. He, along with Jermain Defoe, has been a standout performer in an otherwise forgettable campaign which has seen them relegated into the Championship. David Moyes rated the young Englishman at around £30m, though he resigned earlier this week and the club could be forced into selling to the highest bidder.

Wenger has already said he’s happy with the club’s goalkeepers and Wojciech Szczesny’s return will have strengthened his confidence in long-term depth at a high level. However, it’s entirely possible that Woj will seek a move away if not given assurances, whilst Sunderland’s poor season means that Pickford is more likely to be tempted into making a move away to remain in England’s top flight this summer.

Lyon midfielder Corentin Tolisso is once again a distinct possibility, after reports suggested that frontrunners Juventus have been put off by his price-tag of £30m. Tolisso’s club team-mate Alexandre Lacazette is more of an unlikely signing though, as a verbal arrangement has reportedly been reached between themselves and Atletico Madrid – though this transfer will only be complete if their transfer ban is lifted.

If unsuccessful, Arsenal will feel inclined to make another approach for the Frenchman’s services, having netted 37 goals in 45 appearances (all competitions) this season.

Here’s a possible illustration of how next season’s Arsenal squad could look, if all the possible moves are finalised: 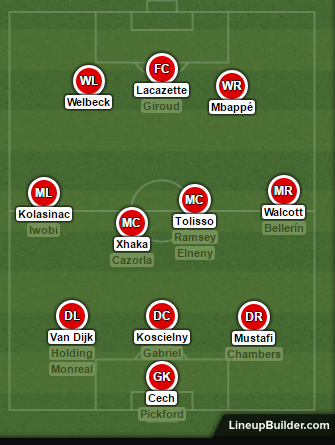 This would obviously fluctuate depending on formations, tactics and opposition but highlights the level of depth that Arsenal have, and the numerous possibilities which could be explored next season even in the absence of Alexis and Özil if they are to leave.