Francis Coquelin and Granit Xhaka in midfield just doesn’t seem to be working.

On one hand, we have the attack-minded Xhaka, who can deliver a beaut of a ball from 30 yards without even having to take a second glance. However, he can be slightly rash. Although the amount of cards he’s received (1 red, 6 yellows in 8 appearances) doesn’t look too great, he’s not malicious. Just inexperienced in this league.

On the other hand, we have the more defensive Coquelin, who’s rash, sometimes bordering on dangerous, and doesn’t have an ounce of Xhaka’s passing ability or creativity.

Despite having a marginally higher pass completion rate than Xhaka against Manchester City (81% to Xhaka’s 80%), as you can tell from their pass maps when compared, Coq’s a very different type of player.

For one, Xhaka’s passes are coming from all angles and distributing all over the pitch and he completed 43/54, whereas Coq’s are mainly short, safe and sideways (25/31). 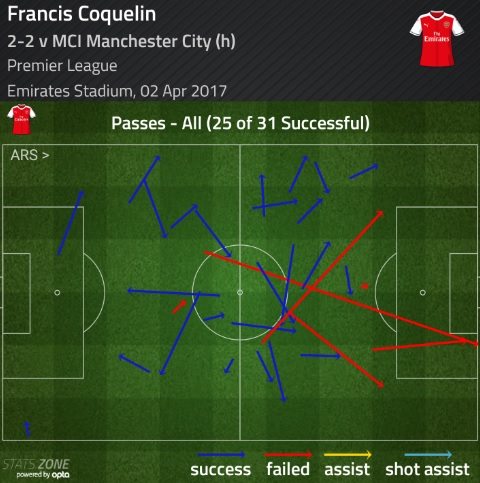 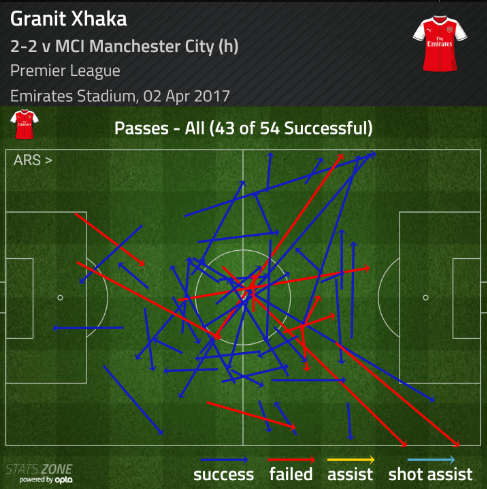 Don’t get me wrong, having a more defensive central midfielder next to a progressive one is actually a pretty sound, standard tactic to have. However, when you see where Coquelin is playing compared to Xhaka, who’s where he’s supposed to be most of the time, you begin to see the problem.

Xhaka’s positioning in far more concentrated around that centre circle. Although he does wander, his main activity is right there in the middle. Coq, however, distributes himself all over the place an equal amount, which is why he’s usually nowhere to be seen when we need him to cover the back four.

Saying this, against City, neither created any chances and both picked up yellow cards inside 32 minutes. Coq won one take-on, they recovered the ball 17 times between them, Coq won 5/8 tackles, the most out of any other Arsenal player, and also pulled off a block. They committed three fouls between them.

Stats via Who Scored & Statszone.