The midfielder was everywhere at once, delivering long ball after long ball for his teammates.

At halftime, Xhaka was one of the highest rated players (6.8) under Hector Bellerin (6.9) on Who Scored. He had the most passes overall, which isn’t much of a surprise – 47/56 – and also completed the most passes in the final third: 14/20.

Although he was only 89% successful compared to Mohamed Elneny’s 97%, his progressive style of play is far more creative than his Egyptian counterpart’s. Elneny’s a metronome, ticking along, keeping rhythm, while Xhaka is jazz. It doesn’t seem like he knows what he’s doing but, most of the time, he does.

I mean, just look at their passmaps.

Elneny’s passes were short and successful, where’s Xhaka’s were all over the place, searching.

But that’s why they compliment each other.

As you can see from Xhaka’s heatmap, he was massive for Arsenal’s midfield against the Hammers, taking a grand total of 133 touches. 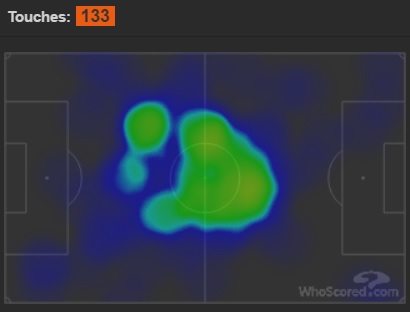 At the end of the match, Xhaka had completed vastly more passes than anyone else on the pitch: 96/109. 23/32 were in the final third and he had one shot on target. He created two chances, won 1/1 take-on, and SEVEN ball recoveries. Xhaka also won the second most tackles out of anyone on the pitch: 3/7. As well as one interception and 2/4 aerial duels. He committed two fouls and… drum roll please… didn’t receive a yellow card!

Xhaka is far from perfect and some of his passing can be a little wayward. He does make mistakes, which can’t always be blamed on those around him.

However, alongside Elneny, he looks a far better midfielder than next to Francis Coquelin.

Stats via Who Scored & FourFourTwo’s Statszone.