Does anyone else find Alexis Sanchez incredibly frustrating at times these days?

The Chilean is, no doubt, our best player. Or at least in our top two. However, his petulance, which is often swept under the carpet and written off as ‘passion’, seems to be holding him back.

During Arsenal’s 2-2 draw at home to Manchester City, a match which the Gunners really needed their star man to step up in, just like he does for Chile, he didn’t. In fact, I’m pretty sure the forward spent more time flapping his arms around sulking and moaning at his teammates than actually chasing the ball himself.

This isn’t new. Alexis has been irritating and moody for a while. Ever since his strop when he was subbed off for Danny Welbeck against Swansea. However, when he’s producing wondergoals and has assists coming out of the ears, it’s easier to let it go. Now, with the 28-year-old most likely off in the next year or two, his shortcomings, of which there are some, are brought to the foreground.

On Who Scored, Alexis is one of Arsenal’s highest rated players with 7.7. However, considering Shkodran Mustafi is our top rated man, this doesn’t mean much. The defender scored a goal and got an assist but otherwise wasn’t great. 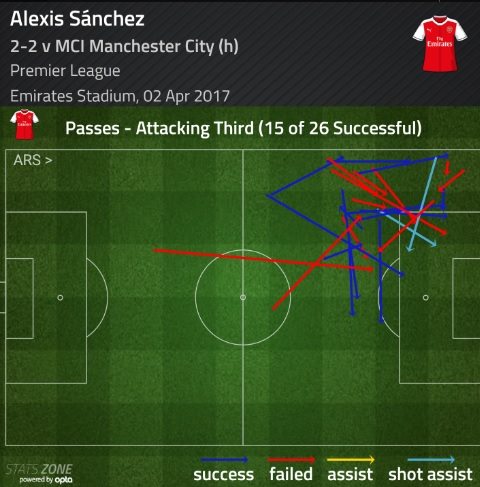 Alexis had just one shot and it wasn’t even on target. Plus, he had a pass completion rate of 63% when it average is 74%. He was also dispossessed seven times, won just 3/6 tackles, 2/2 aerial duels and completed 7/11 dribbles. That man loves a dribble.

Alexis completed just 15/26 passes in the attacking third of the pitch. That’s less than Nacho Monreal (17/20). You know, the defender who’s been pretty poor this season? A forward of Alexis’ calibre really should be doing better, especially if he either wants another club to swoop in for him or an improved deal at Arsenal.

Most interceptions made during Arsenal vs. Man City:

He did make five interceptions though, only one less than Monreal, and created two chances… so swings and roundabouts.

If Arsene Wenger isn’t going to start Olivier Giroud, perhaps it’s time to move Alexis back to the centre? He was virtually unplayable there before. If it ain’t broke, don’t fix it.