Some Arsenal fans booed Hector Bellerin when he came over to see them at the end of the game against Crystal Palace and based on his stats, it’s not hard to see why.

Hector Bellerin had to be led away with an arm around his shoulder by the Ox after he went to the fans at the end of the match and was booed.

Bellerin came over to the away fans, got booed, turned and walked away. Ox put his arm around him.

There is no denying that he has been absolutely rubbish since penning a new six-year deal and sporting that stupid hairstyle.

With that in mind, it still comes as something of a surprise to read that Bellerin has won just nine tackles in the Premier League in 2017.

Hector Bellerin has won just NINE tackles in 2017 in the Premier League. Nine…

That stat is shocking enough on its own, until you realise that he only won EIGHT before the start of 2017.

And when you compare him to Nacho Monreal, a player most will concede is having an ‘awful’ season and wouldn’t mind seeing replaced in the summer? 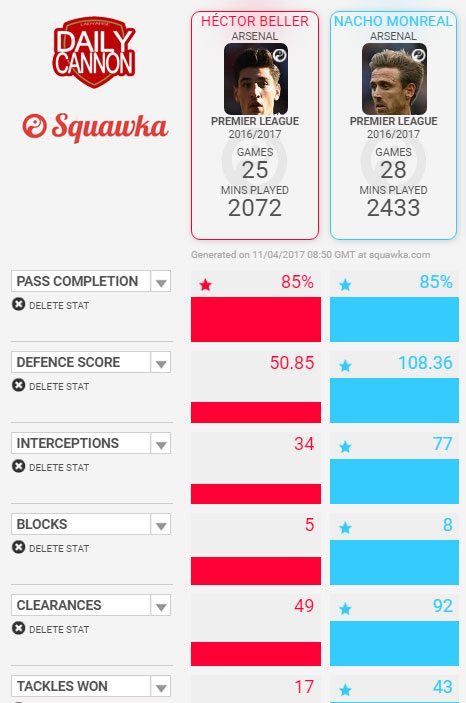 [otw_shortcode_info_box border_type=”bordered” border_color_class=”otw-red-border” border_style=”bordered” shadow=”shadow-down-right” rounded_corners=”rounded-10″ background_pattern=”otw-pattern-2″]There are rumours that Bellerin needs ankle surgery but Wenger would rather play him in this state than trust Jenkinson. That would certainly go someway to explaining what has been an inexplicable fall off the form cliff in 2017.[/otw_shortcode_info_box]