‘Control’ in a footballing context is an almost subjective word that means different things to different people.

Someone who didn’t watch Saturday’s match at The Hawthorns would look at Arsenal’s 77% possession and believe that the visitors were in complete control of the game. That couldn’t be further from the truth. At no point were Arsenal in control of any aspect of that match and they ultimately paid the price.

With that 77% possession, Arsenal circulated the ball efficiently, as they always do when Granit Xhaka and Aaron Ramsey play together in midfield. While the circulation aspect of Arsenal’s midfield wasn’t as broken as it has appeared at times over the past two years when other personnel have been used in the midfield base, the absence of Mesut Özil and his ability to both spot and play an eye of the needle pass meant that it was just possession for possession’s sake, with nobody willing or able to play the pass that would have been required to bisect West Brom’s focused and increasingly stern defence.

As a result of this, Arsenal spent their 77% possession circulating the ball in areas where West Brom were happy for them to have it. It was the hosts who truly ‘controlled’ the game, by controlling the space in which they allowed Arsenal to play. They settled in their deep defensive block, maintained their spacings and made it difficult for Arsenal to play through their lines. It proved enough to outlast their visitors.

Throughout the course of a season, you’ll encounter a number of sides who will look to set up like this. Sometimes they gift you an opening through someone being lazy or switching off. Sometimes you chip away at them until they get tired and you can force a mistake in the final 15 minutes of the match. Sometimes you call upon the creative spark of your elite playmaker to pick an almost-impossible pass and fashion an opening.

We’ve seen Liverpool struggle time and again this season and last against the lesser sides in the league because of their lack of anything even remotely resembling an elite playmaker.

Arsenal’s own master locksmith, Mesut Özil, was unavailable through injury on Saturday, and his teammates’ attempts to break down a resolute West Brom showed a bleak look into a far darker future should he leave in the summer.

Beyond the usual platitudes, he revealed that Arsenal felt ‘comfortable’ in the first half. That was clear to see. At 0-0 and 1-1, Arsenal were indeed ‘comfortable’ circulating the ball in a U shape, with few players feeling the need to try to take a chance and force proceedings. 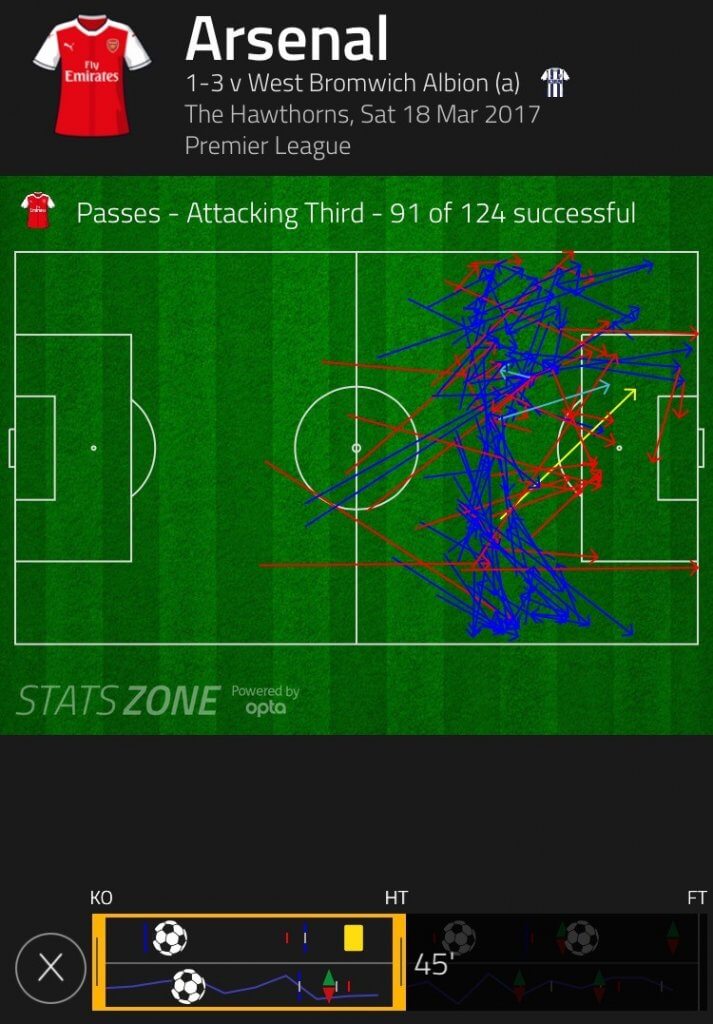 Valid concerns have been raised about a lack of leadership in the side with regard to organising shape without the ball and positioning at set-pieces.

A concern just as valid is players playing safe passes, rather than looking to engineer an opening. Without Özil, it was up to one of the existing players to take up that mantle, and none of them did it.

Granted, sometimes it is not physically possible to pass a ball through an obstructing mass of humanity, and you sometimes forget this when you’re screaming ‘SHOOOT’ when a player has the ball 30 yards from goal, even if there are 10 opposition players between him and the net. But with possession play, measures can be taken to manipulate those 10 bodies and fashion an opening to progress the ball through the final third.

Arsenal didn’t do that, as demonstrated by the positions in which the front 3 received the ball. 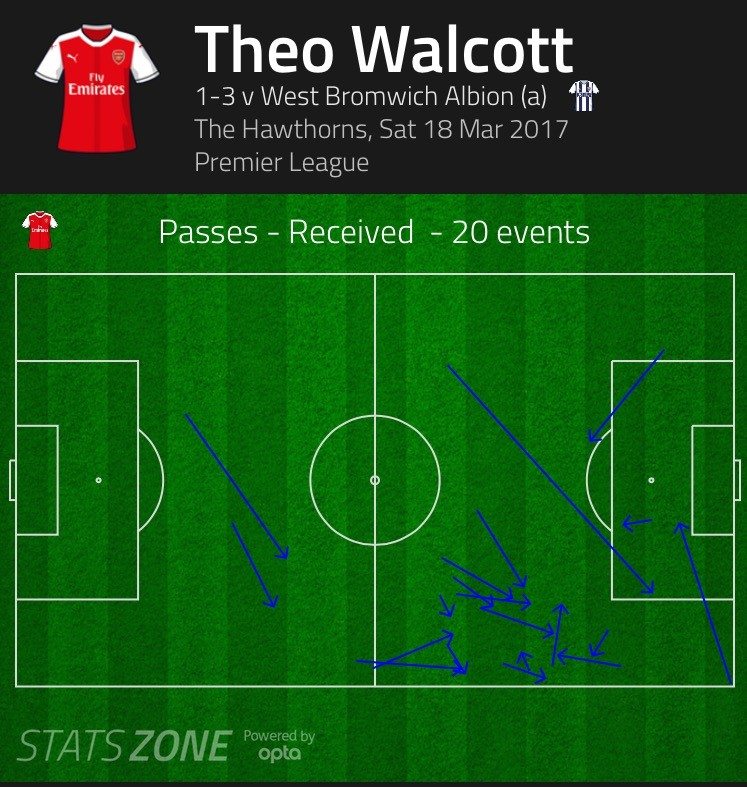 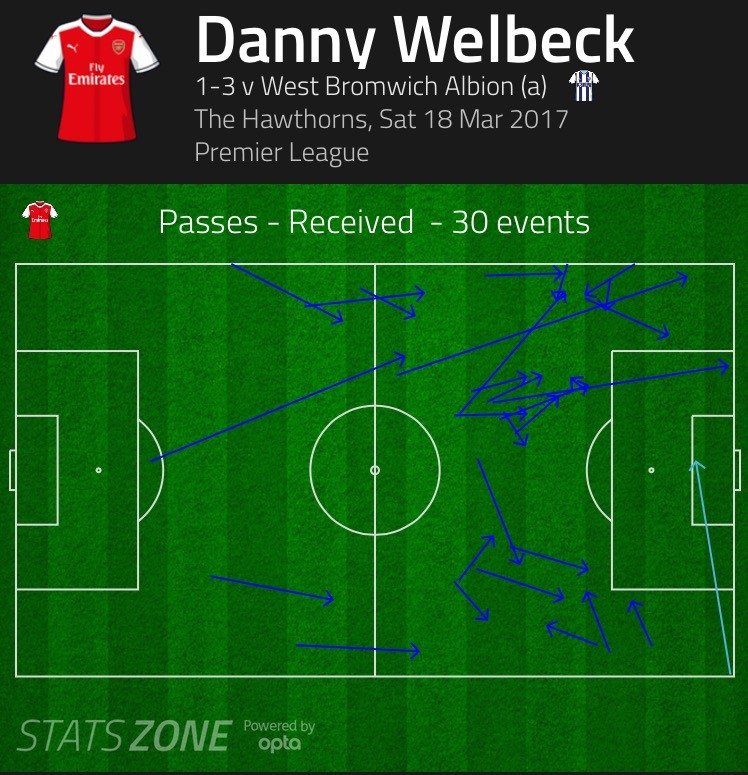 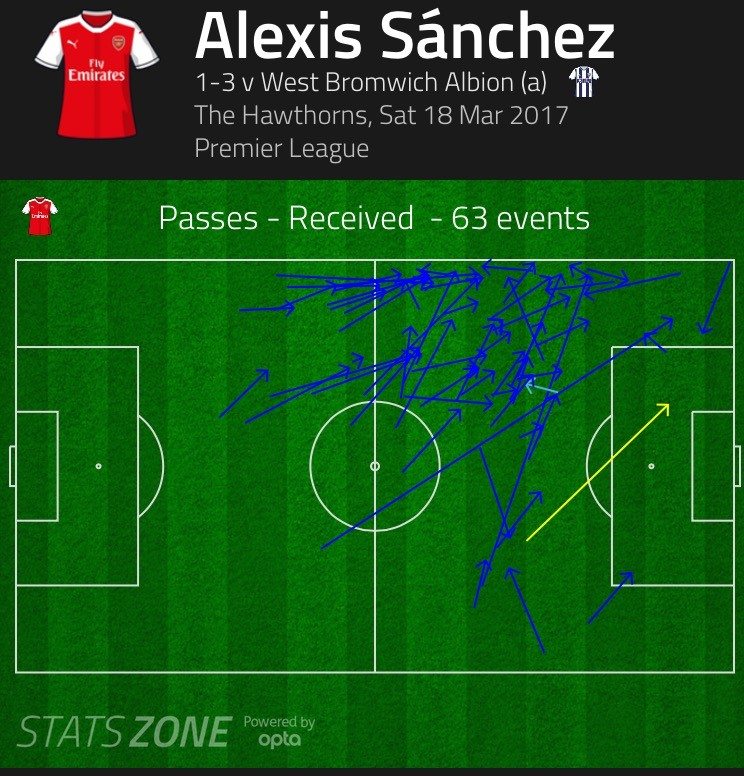 Danny Welbeck and Theo Walcott were amongst Arsenal’s least effective players on Saturday.

The spacings of West Brom’s midfield also filled any potential passing lanes and it was going to take something special for Arsenal to get in behind them. Other than Xhaka’s ball for the Alexis equaliser and the chance Ramsey superbly fashioned for himself, Arsenal did little to trouble West Brom from open play.

The most troubling thing about Saturday’s defeat wasn’t Arsenal’s lack of organisation without the ball, which has been evident all season regardless of personnel. It wasn’t their total lack of awareness defending the set-pieces they had acknowledged as a key weapon for their opponents.

It wasn’t even Petr Cech coming off injured meaning that David Ospina, who was calamitous again for West Brom’s 2nd goal, and will likely play at Wembley in an FA Cup semi final. But rather it was Arsenal’s play as soon as they went 2-1 down. It hit a sort of stagnant stasis.

All the players appeared to be going through the motions. They looked well and truly beaten.

There were two teams on the pitch on Saturday.

One is in that purgatorial position of having secured top flight safety but being nowhere near challenging for a European spot next season.

The other has a fighting chance of qualifying for Europe’s premier competition with an FA Cup semi final to look forward to.

A casual observer watching their first game of football would have been hard pressed to know which team was which.

Aaron Ramsdale: No-ones hiding away from that

Lokonga to start: How Arsenal could line up vs Aston Villa