When Arsene Wenger said that “you wouldn’t necessarily find a Cazorla even if you wanted to,” I thought, “Sounds like a challenge!”

The petite Spanish midfielder has been one of the best central mids in the English game, and maybe even the world these last few years. He has evolved from the goal scoring winger that he was in his first season at Arsenal.

His ball distribution and surprising defensive capabilities have seen his career last into his thirties in a more central location. However, he is going into the last year of his contract, chances are he isn’t immortal, and in true Arsenal fashion he is consistently plagued by injuries.

The recent news that he is probably out for the season has saddened us all.

As much as we all hate to admit it, the time has come to look for a new number 8; a new ball-cycling midfielder to bridge the gap between the defenders and the attack. So the replacement ideally would be a similar player with less of an injury history that doesn’t completely break the bank, and is relatively young so that we don’t have to do this all over again in a year or two.

Here are some of our options.

A player that should be fresh in all our minds from the Champions League Group Stages is Marco Verratti. He is an easy comparison because of his similar stature, but there are similarities in his game as well. The Italian does not provide as much in the way of assists and goals (2 goals and 6 assists this season), but his passing is superb.

He has posted an 88.6% completion percentage, with distribution all over the field, with many of them going forward. Here is his pass map from the game against Basel, in which he completed 92% of his passes and created 3 chances:

He would seem to be the master distributor that we are looking for to replace Santi.

Verratti has also not shied away from his defensive responsibilities. He has averaged 3.2 tackles per game this year, compared with 1.6 from Cazorla before he was injured.

At 24 years old, he seems the perfect replacement for the Spaniard. There is a slight injury worry, as he underwent groin surgery last summer. But here comes the catch: he definitely won’t be available on the cheap.

After a bust-up with manager Unai Emery in autumn, the “Verratti-to-Arsenal” rumours began swirling. Since then, he has settled in and appears comfortable. With how successful PSG have been with the recent demolition of Barcelona, he might not also be willing to make a move unless a dump truck full of cash with an Arsenal logo on it parks outside of his house.

Transfermarkt gives him a value of €40million, but it is thought that he has a price tag in the neighbourhood of Pogba money. He is currently making €130,000 per week at PSG.

Fingers crossed the he and Emery go at it again.

A more affordable alternative to the little Italian could be Julian Weigl, the young German playing for Dortmund.

Dortmund are known to sell off solid players when offered a reasonable sum. Transfermarkt gives him a €23million value, but with his performances this season he is likely to be valued at more than that (though not nearly as high as Verratti). He is currently on €20,000 per week, with Dortmund offering to triple it.

So let’s take a look and see if he could fit for Arsenal.

The 21-year-old Weigl has been excellent this season. He has been a real breakout star for Dortmund, who seem to churn out at least one great young player per season.

He has appeared in 38 games for club and country, and has posted 1 goal and 0 assists. Not especially stellar numbers upfront. However, he has an astounding 91% pass accuracy and has chipped in 2.4 tackles per game. He is also not afraid of the big stage.

He seems to play well against great teams, something that Arsenal usually do not do. When Dortmund pulled off the first of their TWO improbable draws against Real Madrid, he had an astounding 94% pass accuracy with two chances created. Here is the map from that game: 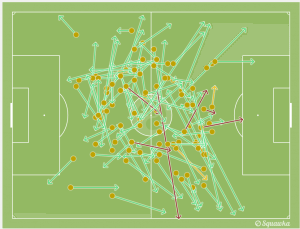 He made an impact throughout the match.

In the second draw against the Spanish giants, he had a similar 90% passing day. Although he is a bit more of a defensive midfielder than the deep plying playmaker that Cazorla is, when you put together his passing, tackling, and distribution, he could be a superb replacement for Santi.

A player that has seemingly come out of the blue is the 25-year-old  Ivorian Jean Seri, who plays for a team that has done the same in France’s Ligue 1—Nice.

He plays in a bit more advanced role than the previous players mentioned, as he only posts 1 tackle and 1.3 interceptions per game, but is not fully an “attacking midfielder.”

However, his offensive contribution has been significant for the upstarts, Nice. He has 3 goals and 9 assists in 31 games, with an 89% pass completion.

The difference with Seri is that his passes pose much more of a threat than Verratti and Weigl. He has a fantastic 2.3 key passes per game, reflected in his higher assist total. He has created a total of 52 chances this season per Squawka.

Here is his map from the recent victory against St. Etienne, is which he created 4 chances. 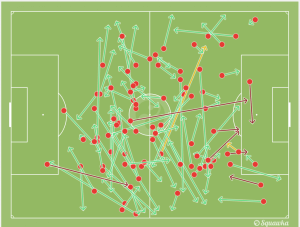 As you can see, his distribution and positioning are similar to the others. The sheer volume of passes is not as high, but he is just as accurate and even more dangerous.

Seri would need a stronger defensive midfielder to partner with, but might be an excellent scoop for the Gunners as he would more than likely be vastly cheaper than Weigl and Verratti.

Finally, the best replacement might be right under our noses.

Our own Granit Xhaka is an excellent distributor of the ball. He has chipped in 3 goals and an assist since joining the Gunners, with 89% pass completion. He has contributed a strong 2.4 tackles per game.

In the 4-0 demolition of Swansea, he had a 93% pass accuracy and had several shots on goal. His distribution, particularly his longer passing, were fabulous that day, as you can see by his map: 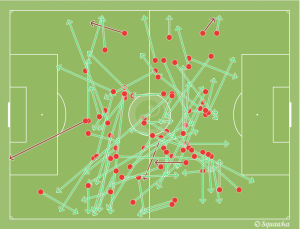 The only problem with Xhaka is that he seems to be a bit of a hothead and seemingly already has a poor reputation among Premier League referees.

He racks up cards like he thinks they count as much as goals, with 7 yellows and 2 reds in 38 games for club and country. I

t is tough to rely on a player that can’t stay on the pitch.

If we can find the right pairing and maybe get him some anger management classes, he might be the man to replace the infallible Santi Cazorla.

All stats from WhoScored and maps from Squawka unless noted otherwise