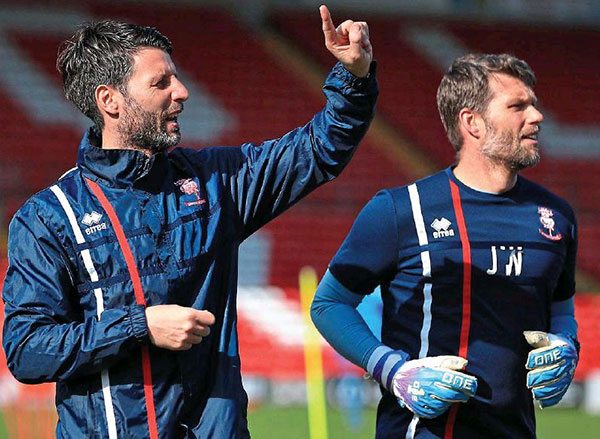 Lincoln City’s goalkeeping coach has admitted they contacted Sutton United to try and find any chinks in Arsenal’s armour ahead of the FA Cup clash at the Emirates.

Pushing the boat out and spending a night in a five-star central London hotel, Lincoln City and their 9,000 fans are aiming to make a weekend of this, whatever the result.

But the Imps have seen and heard enough about Arsenal to know that there are cracks in their Premier League façade and they will be looking to exploit every one of them.

In Danny Cowley, they’ve shown they have a manager who is not only capable of identifying those weaknesses, but setting his team up to exploit them.

“We’ve spoken to the manager and a few of the lads at Sutton,” Jimmy Walker said. “We’ve picked their brains about chinks in the Arsenal armour. There aren’t many but we will use everything we can.

“Arsenal are one of the best in the country but there are a few things there that don’t seem quite right at the moment.

“The manager has been fantastic and they have great players but there’s something not adding up. They’ll probably make changes and we know that whoever comes in will be top quality.

“If we have some luck, if they have an off day and the changes don’t work, you never know.

“We’re going to make sure we enjoy the day but we’re also going to have a right go at it.

“We’ve said the same beforee every Cup round. We have a certain style of playing. It took a little time because, at this level, youu work with the players you have — you don’t have the luxury of bringing in a dozen new ones.

“The lads have been fantastic, though. They deserve all the accolades because they’ve taken everything we’ve said on board and worked so hard.

“Without the players buying into what we’ve said, it would not have worked. We asked ourselves: ‘What have we got here? A goalkeeper who kicks well, a big, oldfashioned centre-forward and some good players around him.’ So we decided to play in the right areas but get the crowd up, play some exciting football and press teams.

“Mind you, we wouldn’t be too disappointed to see Alexis Sanchez on the bench again, plus a few more.”