Arsenal’s fundamentally sound gameplan was undone by a series of individual errors in a 10 minute period as the Gunners slumped to a very different 5-1 defeat at the Allianz Arena than the one they had suffered last season.

Despite a 10 minute second half implosion where they conceded three times, it was Arsenal’s play in the final 27 minutes of the match that was the most concerning.

A gameplan and set of tactics, regardless of how elaborate or simple, are reliant upon the players’ execution of them once they cross the white line. Plans are undone by mistakes. Arsenal made too many mistakes against Bayern Munich. Certain players consistently make too many mistakes.

But before it all went horribly wrong for Arsenal in the second half, it was actually going quite well.

Arsenal demonstrated in the first half that they had a fundamentally sound gameplan for the first leg of their Champions League Last 16 tie against Bayern Munich. They’d sit back, keep it tight, and look to nick a crucial away goal on the counter. They’d learned from their mistakes of being too open in the first leg in 2014/15 against Monaco and 2011/12 against Milan.

Arsenal would not attempt to dictate play or control possession. They would be content to concede control of the ball to the hosts. They would instead sit back and look to control the space in which they allowed Bayern to play in. Arsenal would allow Bayern to have the ball up to 25 yards from goal and in wide areas, but look to cut off passing lanes and prevent penetration into the box. The below graphics demonstrates that Arsenal were broadly successful at this. Bayern weren’t getting ball in to feet in key areas. 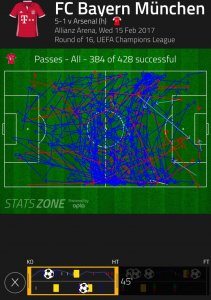 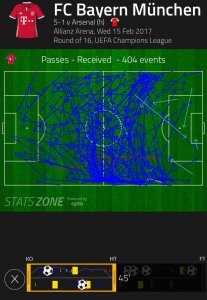 When Bayern created chances from open play in the first half, these opportunities were generally from range, with only two other opportunities in the box as well as Arjen Robben’s opening goal. 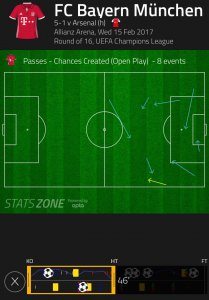 If you had offered any Arsenal fan the option of restricting Bayern Munich to 3 clear chances in the first half and going in level at half time with what at the time seemed a crucial away goal, they would have bitten your hand off. The plan was working, despite having been put in peril.

Arsenal’s gameplan had been thrown in jeopardy after Francis Coquelin’s mistake had enabled Arjen Robben to cut in on his left foot and score the most basic Arjen Robben goal that he’s been scoring for the past 15 years. Bayern had landed a body blow, which shook Arsenal, but the Gunners managed to stay on their feet and were not knocked down.

The players kept their heads, rode the waves for a shaky 10 minute spell in which Bayern asserted dominance, and then found steadier footing and looked to get themselves back in the game. Arsenal had survived being on the ropes, protected themselves from a brief Bayern barrage, and were now ready to step out and start punching back. There was still plenty of time of the two-legged tie to go and Arsenal had managed one of the rocky spells well enough and survived it.

Bayern unquestionably had more of the ball, but this possession occurred in relatively ‘safe’ areas. Arsenal looked to frustrate Bayern, forcing the hosts to try increasingly risky passes, which the strategically placed walls of 10 yellow shirts would look to intercept, before springing a swift and incisive counter-attack. It was exactly how Sir Alex Ferguson set up his Manchester United sides against Arsenal from the 2008-09 season until his retirement in 2013.

Arsenal looked promising countering through Mesut Özil, Alexis Sanchez, and Alex Oxlade-Chamberlain and troubled Bayern’s high line of retreating slow centre backs for pace time and time again. After eventually getting level, Arsenal looked comfortable in defence and the more likely side to score the game’s next goal from a breakaway.

And then four minutes into the second half, it all started to go horribly wrong.

After Laurent Koscielny went off after overstretching himself keeping the ball away from Lewandowski, all confidence and composure drained from Arsenal in an instant. However, all was not lost. They’d seen out a 10 minute spell on the ropes before and had rebounded commendably in the first half. They had this experience, fresh in their minds, to call upon and give them confidence they could do it again.

But four minutes after Koscielny’s withdrawal, Robert Lewandowski made it 2-1 to the hosts. 10 minutes later, it was 4-1. Arsenal had completely lost their heads.

However, there were still 27 minutes of the first leg to rebound from this 10 minute blip. Arsenal had been 4-1 down before, having forgotten how to play football for 10 minutes, on the opening day of the season against Liverpool. On that day, they responded by trying to dig their way out of the massive hole they had put themselves in.

What was more concerning than conceding 3 goals in 10 minutes against Bayern was that the Arsenal players didn’t seem to be trying to dig their way out afterwards. You can understand the shock and trauma of the situation affecting players and throwing them off their game, but there were 27 minutes left to score another away goal against a Bayern team who looked shaky against pace, and then 90 minutes of a home tie. Going back to London 4-2 or 5-3 down gives you a fighting chance of winning the home leg 2-0 and advancing on away goals.

Arsenal didn’t give themselves that.

Instead, Bayern were free to move the ball about, relatively undeterred by what were now 10 yellow traffic cones . Arsenal were so passive that they only made 1 interception and 11 tackles in the final 27 minutes, none of these coming in the central territory they had sought to control earlier. Arsenal did nothing to force Bayern into errors, they did nothing to impose themselves on the game, they did nothing to give themselves a fighting chance in the second leg. They meekly went out of the Champions League not with a bang, but a whimper. 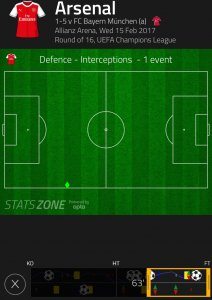