A disjointed and unconvincing Arsenal side achieved what they ultimately needed to against Marco Silva’s rejuvenated Hull on Saturday, but there is cause for concern moving forward.

Given recent results, all that truly mattered against Hull was being good enough to take all 3 points. And Arsenal were just about that. However, the manner of the performance and how vulnerable Arsenal looked when their visitors counterattacked served as a reminder that there is still work to be done.

Mesut Özil has been on the receiving end of unfair criticism for his individual performance. Rather than analysing individual misplaced passes and shots off target, more can be learned from trying to work out why he played as he did, and why he played where he did.

Özil didn’t perform at his usual level because he was forced to simultaneously play 3 separate positions due to circumstances beyond his own control.

Arsenal’s record signing and playmaker-in-chief is the best, and arguably the last, elite number 10 in world football. However, you need to create a set of circumstances in which it’s possible for him to thrive. Arsenal didn’t do that on Saturday and were only able to get the ball to Özil 45 times throughout the match. 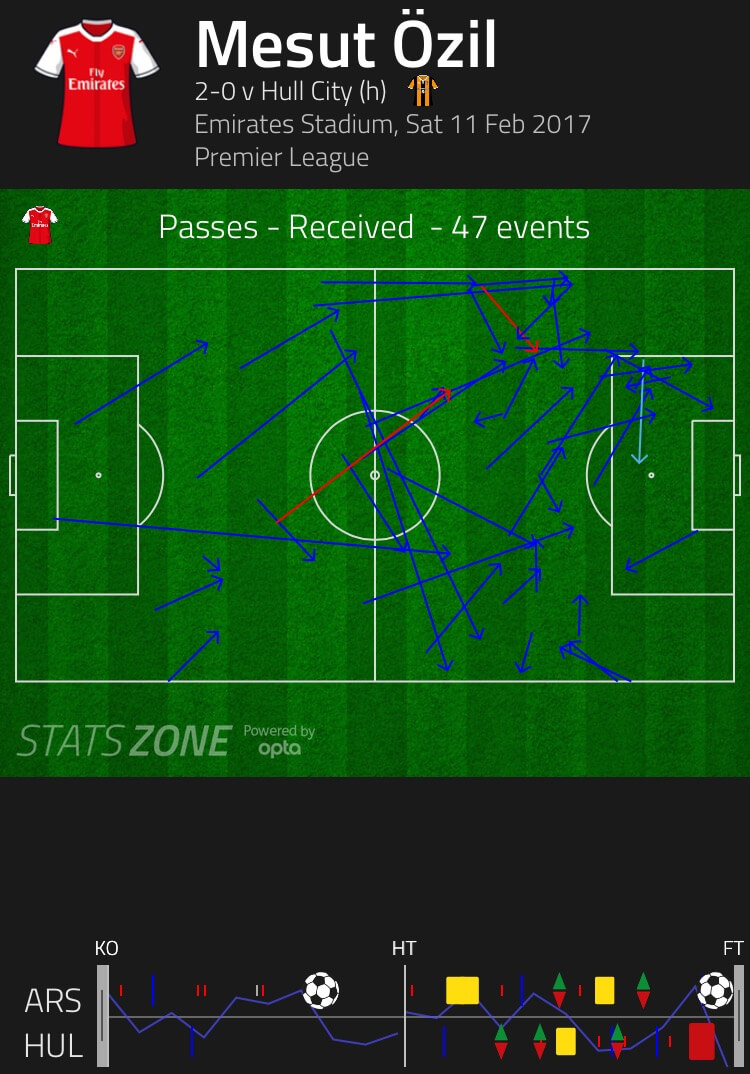 As had been the case for this season’s trips to Manchester United, Manchester City, and Chelsea, Özil and the front 3 were not afforded a functioning midfield base behind them. Saturday’s makeshift pair of Alex Oxlade-Chamberlain and Francis Coquelin did not effectively control possession and could not provide a platform for the attacking unit.

While Oxlade-Chamberlain showed an impressive range of passing from central midfield, only 3 of these passes went to Özil. While Coquelin got the ball to Özil 9 times, he received all bar 3 of these passes in thoroughly innocuous areas. 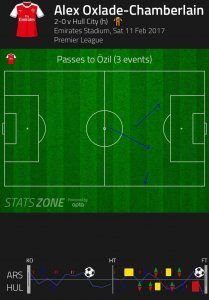 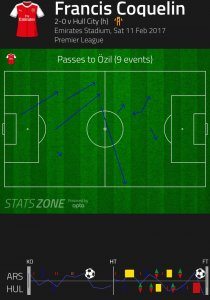 One thing that was lacking last season and has again been lacking since Granit Xhaka’s red card against Burnley is a functioning midfield base who can service Özil, feeding him the ball in pockets of space in the final third, enabling him to pick out runs and play telling passes into dangerous areas. If he’s receiving the ball in inert areas, with more men between him and the goal, he’s less capable of playing it early and reach Alexis Sanchez or Theo Walcott in a shooting position.

This lack of structure behind Özil and the supply line from midfield being cut meant that he had to drop ever deeper to receive the ball, looking to initiate Arsenal’s attacks himself. However, the formation Arsenal have been playing this season dictates that he needs to stay higher up the pitch and play as a second striker, supporting Alexis, sometimes even running beyond him when the Chilean drops deep or pulls wide.

When he’s receiving the ball in suboptimal positions, he can’t be as effective as we need him to be. Consider these passing maps from the Manchester trips. Look at where he’s being given the ball. The structure of the team and the actions of his teammates aren’t giving him the best possible chance of engineering key openings. 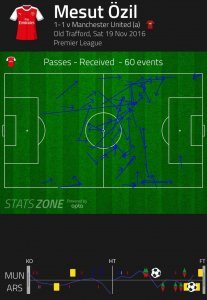 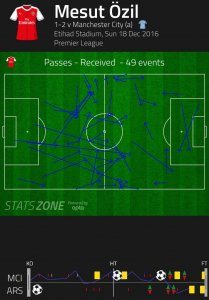 Another thing inhibiting Arsenal and Özil last season was the absence of a wide secondary playmaker to be his sidekick. He now has that in Alex Iwobi. The two of them linked well in the final third of the pitch against Hull. However, Iwobi was also short of service from central midfield. 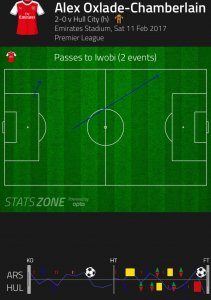 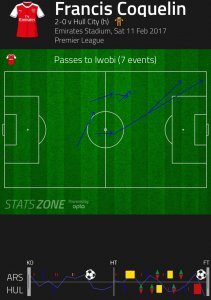 Arsenal’s two most creative players only received 9 passes from central midfield in threatening areas of the pitch. This was a big problem against Hull, but will hopefully be amended when other options are available to play at the base of midfield.

However, another fault with Saturday’s midfield is more serious and has been apparent even when more senior personnel and established combinations have been available for selection in central midfield earlier in the season.

It wasn’t just Arsenal’s front four who the makeshift midfield pair had a detrimental effect on. While the midfield duo were a lot better at showing for the ball, giving their centre backs an easy option to alleviate pressure than they had at Chelsea, their lack of understanding with one another meant that were just as suspect at offering them protection against the counterattack, every single time Hull broke.

While Oxlade-Chamberlain was ostensibly the deeper of Arsenal’s two midfielders when Arsenal were in possession, both he and Coquelin more or less played on the same line, as demonstrated by these passing graphics detailing passes between the two of them. 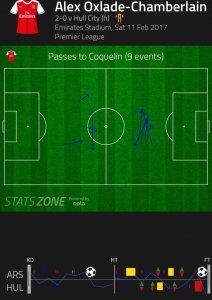 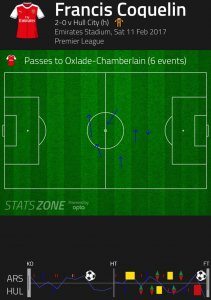 The danger this posed was that when Arsenal lost possession, both central midfielders could be taken out of the game by one simple Hull ball, initiating a dangerous counter-attack. With Arsenal traditionally pushing fullbacks on to support attacks, this often left both the centre backs isolated and retreating against the waves of Hull players breaking forward.

Fortunately for Arsenal, Hull weren’t able to punish them on the break as they had Liverpool a week ago. However Arsenal’s structure and spacings left them looking vulnerable every time the visitors counterattacked, and one lucky bounce, slip, or more precise finish could have seen them score.

This appears to be a systemic flaw with Arsenal’s midfield base as it has looked vulnerable against the counter in numerous matches, regardless of personnel. It happened to Cazorla – Coquelin up at Hull, Elneny – Coquelin at home to Middlesbrough, and to the Cazorla – Xhaka – Coquelin trio at home to Swansea in the two minutes they were all together on the pitch.

This suggests that there is no prescribed solution to midfield play and the players are largely left to figure it out for themselves. The way to remedy this is to either be more prescriptive with tactics and in training so these players better understand what they need to do, or to use more intelligent players, in pairings that have a better understanding of one another’s games.

Amending this could be the difference between finishing the league campaign in 2nd or 6th, winning a 13th FA Cup or not, and progressing in the Champions League.