In a special ‘Arsenal in crisis’ section, the Arsenal-obsessed Daily Mail have an EXCLUSIVE today claiming something every other paper is reporting as well – that Arsene Wenger will step down in the summer.

The Mail has a history of employing Spurs supporters (and a hardcore West Ham one, their football editor, Ian Ladyman) and the rag has often taken an extremely hard line when it comes to Arsenal and this is no different.

The TalkSport of the tabloid world when it comes to their bias and tendency to use Arsenal fans for clicks and hits, today’s exclusive comes from Sami Mobel, who also used to work for TalkSport.

Mobel states that there was a ‘heated dressing-room inquest led by senior players’ after the defeat against Bayern as if this is a bad thing. Don’t these people spend their weeks telling us how Arsenal don’t have any fighters or spine? That they don’t care?

The sum total of the information available in the piece about the ‘dressing-room row’ included someone apparently spotting Alex Oxlade-Chamberlain ‘berating his team-mates’. 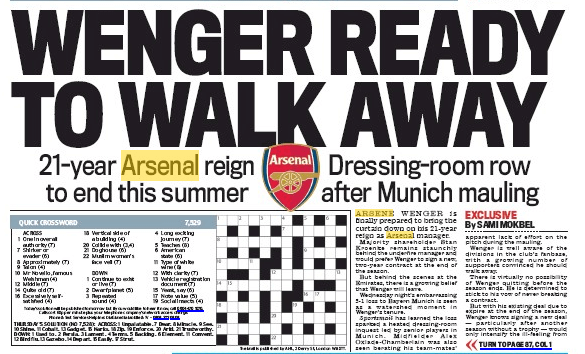 He then goes on to say how Spurs manager, Mauricio Pochettino, is wanted by some at the Emirates as he would be a ‘perfect fit’ for Arsenal despite the non-existent chance of that happening.

They also list Arsene Wenger’s press conference as something to look out for today:

And if you’re wondering how the Mail covered Tottenham’s defeat in Gent (giving them an away record in all competitions that reads DDDLDLLLWWDDLL), here you go: 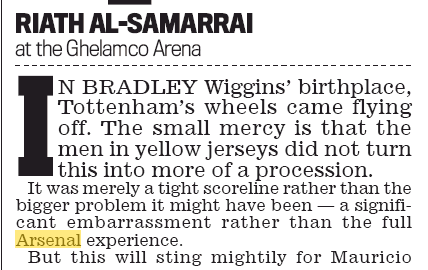 It’s also worth noting that the Sun had a piece about a dressing room row as well, but they claimed Alexis was at the forefront of it. Steve Bould, they say, ”hurled a water bottle at the wall’ as players blamed each other for their shambolic defeat.’

From these two pieces, the story has spread and gained a lot more ‘anger’ and ‘fury’ along the way.

To be honest, I’d be angry if they hadn’t shouted. Players who ‘don’t care’ (as we’re often told about this bunch and manager) don’t get on like this.