The Daily Star are today claiming that Arsenal players and coaches feared that Arsene Wenger was going to quit on Wednesday night, with an unnamed source saying ‘he was so low.’

Speaking to the German media before the game against Bayern Munich, the boss revealed that he is likely to make a decision about his future in March or April. A two-year contract is waiting for him to sign but it seems highly unlikely that it will now be signed.

Since Wednesday night there have been a number of ‘insiders’ and ‘exclusives’ in the tabloids, all saying the same thing – Wenger will quit at the end of the season – but it is important to note that all of these assertions are based on what these people ‘think’ – Wenger has told nobody what he is planning to do. 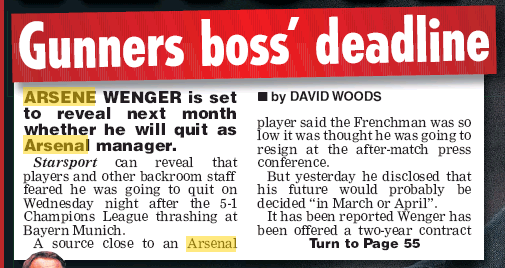 The Daily Star first say Wenger made the comments about his future on Thursday. He didn’t. It was on Tuesday before the game, speaking to German outlet ZDF. They clarify this in the remainder of the article, but it hardly makes for reassuring reading if they are giving two versions of the same event in one short story.

The Star also state that Wenger told ‘friends’ at the start of the season that this one would be his last, but that seems highly unlikely.

Anyone Wenger would trust that information to is not going to speak to the Daily Star.