Playing in a more central role alongside Ainsley Maitland-Niles and Jeff Reine-Adelaide, Alex Oxlade-Chamberlain put in quite possibly one of the performances of his career against his former club, Southampton.

Although the Ox didn’t score during the 5-0 FA Cup victory, which saw Theo Walcott score a hattrick and Danny Welbeck net a brace, he was pulling the strings from start to finish. Instead of getting tired, the 23-year-old just got better as his confidence grew and he warmed up into the (sort of) new role.

According to WhoScored, Alex was Arsenal’s best player and I can’t help but agree. He was simply superb.

He made 68 passes, 62 of which were successful, and took 88 touches overall. That’s a pass completion rate of 91%, which is amazing for a player known for frustrating fans because of his – at times – sloppy passing and tendency to over-complicate simple moves.

The Ox also won three take-ons, two tackles and two interceptions, showing that although he was fantastic when going forward and creating for the rest of the team, he was also mucking in at the back and helping defend. You can see from his heatmap that although he was concentrated centrally, leaning towards the right, he was all over the place. 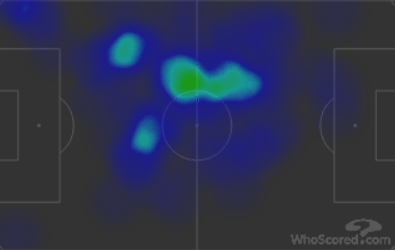 Plus, he made three key passes and assisted Danny Welbeck’s second goal of the evening.

Perhaps this performance will mean Arsene Wenger starts to give the Ox more of a chance in the centre.