Lucas Perez made another appearance in an Arsenal shirt against Southampton on Saturday and was once again hugely influential.

The former Deportivo forward supplied an assist for Danny Welbeck’s first goal in the 15th minute, which now means that the Spaniard has contributed to 12 goals since signing for Arsenal in September.

The 28-year-old’s passing against the Saints was superb. No frills or fancy footwork, just perfectly-weighted, decisive football.

Lucas Perez has directly contributed to 12 goals (6 goals & 6 assists) in his 14 appearances in an Arsenal shirt this season. #afc pic.twitter.com/tR4g5ZqqpC

For the record, Jamie Vardy has the same number of goals, two fewer assists – all in fewer than 50% of the game time.

While these stats may not sound mind-blowing when you’re used to watching Mesut Ozil string together 32 passes without so much as breaking a sweat, when you compare them to Lucas’ average stats, you begin to see what a brilliant game he had against Southampton.

According to Squawka, Lucas’ pass accuracy is usually around the 78% mark, whereas, at St Mary’s it was 80%.

Overall, Lucas isn’t the flashiest player but he does the basics well and has brilliant vision. We don’t need another show-stopping, goal machine when we have Alexis Sanchez, or in the case of the Southampton match, Theo Walcott and Danny Welbeck, scoring for fun. We need reliable players who know how to do their job and give everything for the team.

For instance, just look as Lucas’ heatmap against the Saints. Although there’s a very clear patch up front where we obviously focused on, he was all over the place, back in defence, up the left wing – everywhere. 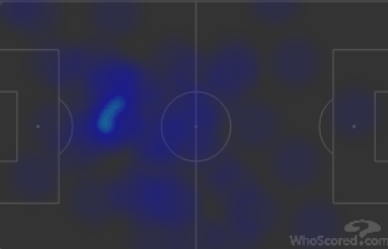 Hopefully, the forward can continue. I’m seeing more and more love for him on social media and if he keeps on improving, I don’t see why he can’t worm his way into the starting XI more often.