Olivier Giroud has given an interview to Planète Foot in which he talks about his pride at being an Arsenal player, signing a new deal and what his plans are for the future.

Giroud is averaging a goal or assist every 61.8 minutes this season. While there is some debate about Arsenal’s ability to attack at pace with the Frenchman in the side, there’s no denying that he makes a big impact more often than not.

Asked how it felt to sign a new deal with the club, Giroud said, “Happy and proud. For me, it is the continuity of a work of several years. I’m very happy with everything I’ve accomplished in this club, but I still want to make progress.” 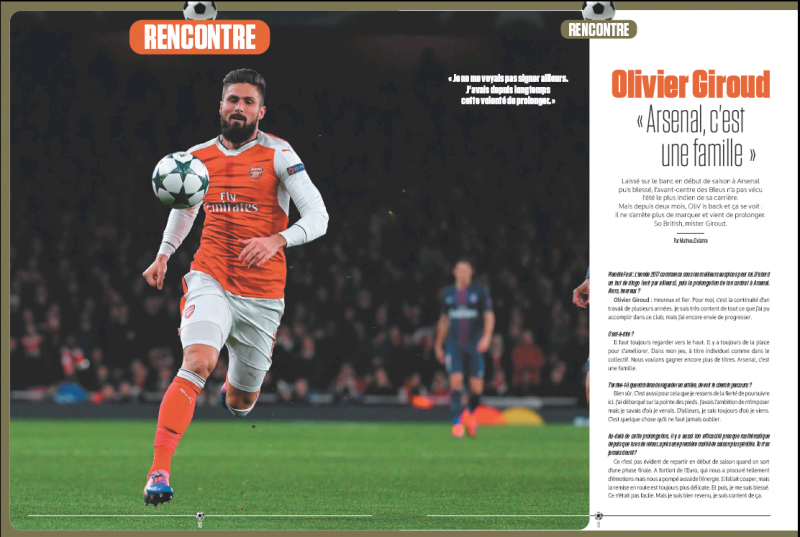 Giroud was then asked if he looked back, to see the road along which he travelled to get to where he finds himself now. “Of course. That is also why I feel proud to continue here. I landed on tiptoe. I had the ambition to impose myself but I knew where I came from. Besides, I always know where I come from. This is something that should never be forgotten.”

And how has he dealt with missing the start of the season? “It is not easy to leave early in the season when you come out of a final phase. The experience of the Euro, which gave us so many emotions but also pumped us [with] energy.

“It was necessary to take a break, but the restart is always more delicate. And then I hurt myself. It was not easy. But I’m back well, I’m happy with that.”

So what of the long-term future? Is he ‘hooked’ on Arsenal for life? “Finish my career here? There would be worse things.

“At the end of my contract, I will be 33 years old. I do not think about it yet. As long as my body leaves me alone …

“To be honest, I did not see myself signing anywhere else.

“I long had this desire to prolong. The fact that it happened at the same time as Kos’ and Francis was both very nice and revealing. Because I hope others will follow us again.

Giroud was also asked about Arsene Wenger’s future amid rumours that the club are in ‘advanced discussions’ with Max Allegri. “We’re all on the same wavelength,” Giroud said. “We hope he will stay.”