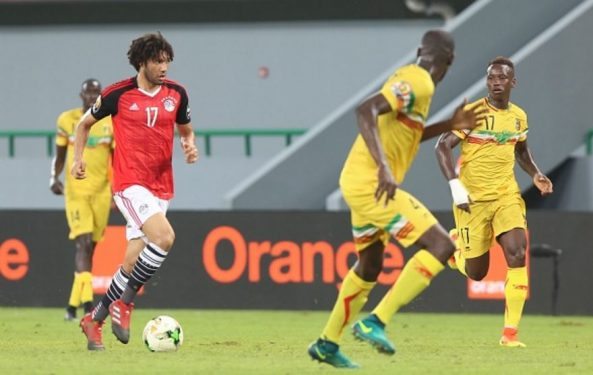 Arsenal midfielder Mohamed Elneny is currently away on international duty with his native Egypt, as they aim to secure a record eighth Africa Cup of Nations trophy this year.

Their last triumph in the tournament was seven years ago now and players like Elneny and Roma’s Mohamed Salah are going to play pivotal roles if the Pharaohs have much chance of international success this year around.

It was an okay first performance from Elneny, who started and completed the full 90 minutes during a frustrating goalless draw against Mali in Group D. After Ghana’s 1-0 win over Uganda earlier in the afternoon, Egypt will collectively know they have to step up their efforts in future if they’re to finish top of the group.

Elneny started in promising fashion, operating as a holding midfielder with occasional freedom to roam forward more than usual near the final third. He made good use of this early on to combine with Salah from deep positions, but was lucky not to be punished after passive marking saw Lassana Coulibaly sneak past him in the box to head goalwards in the 12th minute. Goalkeeper Ahmed El-Shenawy made a good reaction stop to tip his effort past the post, but injured himself in doing so.

It became clear that the goalkeeper couldn’t continue shortly afterward, and the tempo was very stop-start for the next few minutes. After this though, Elneny enjoyed his best spell of the match. Getting increasingly involved in attack as well as looking motivated to defend out of possession, he came close with a curling effort on the edge of the box after combining with that man again, Mohamed Salah. His strike swerved narrowly over the crossbar and although unfortunate, it was encouraging from the Arsenal man, who began to show more frequent flashes of why he’s one of Egypt’s more influential players.

This continued up until half-time and despite looking weary at a few set-pieces, the referee blew his whistle to signal for the interval.

With a number of touches and passes on the ball, it was clear that Elneny was looking for some attacking inspiration as the second 45 wore on and you could almost feel the tension within the stadium. Egypt were expected to win and quite comfortably too, but Mali themselves seemed threatening from set-pieces and their pace on the counter was tough to isolate.

Elneny completed the most passes for Egypt and after a few high-risk attempts early on, realised that the surface wouldn’t sit perfectly for teammates to control and push forward with the ball at their feet.

Despite having the majority of possession, Egypt couldn’t make their dominance with the ball count and ultimately will see it as two points dropped in a group that could throw up all sorts of results in the upcoming fixtures.

It was a disappointing performance from Egypt as a whole and one which did not see their gradual build-up play result in many clear-cut chances to score. They naturally rushed towards the latter stages in hopes of snatching a late winner and although Elneny helped marshal the midfield at times, he was unconvincing when defending set-pieces and struggled to assert much of an attacking edge despite moments of individual quality.