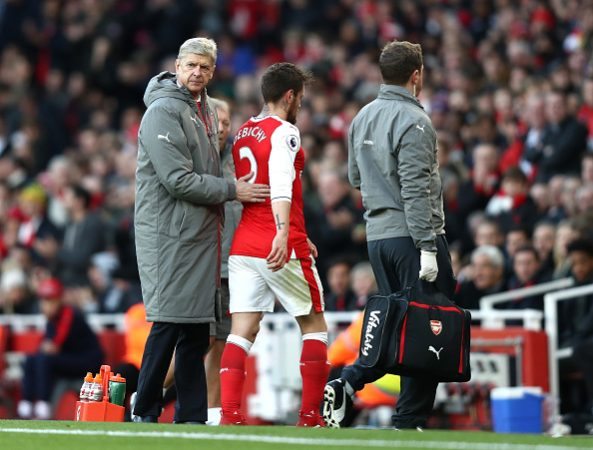 Marseille are the latest team to be linked with a move for Mathieu Debuchy.

Debuchy is as good as gone. Although I’ve said this before, I’d be pretty surprised if we kept him past January while we can still get some money for him since his contract runs out in 2019.

That is, unless the 31-year-old decides to hide in a cupboard for months before reemerging, scoring for the Arsenal u23s and then getting injured… again.

According to reports, Marseille are interested in bringing the right-back to Ligue 1, where he spent the second half of last season on loan with Bordeaux. However, with his new hamstring injury, I wonder if they’ll be quite so keen.

During Arsene Wenger’s press conference ahead of Arsenal’s trip to West Ham, he confirmed that the hamstring injury Debuchy sustained against Bournemouth last weekend will keep him sidelined for at least six weeks. Which, in Debuchy terms is the end of the season… probably.

“Six weeks, I think. It’s frustrating for me, but even more for him because he fights very hard. He is a guy who has an exceptional attitude and is very serious. Overall, I think that he is absolutely disappointed, but he is as well a fighter and he will fight to come back.”

Galatasaray and Roma are also said to be interested.