Arsenal are apparently thinking about making a move for Roma’s midfielder, Leandro Paredes when the January transfer window opens.

Here are a few reasons why it’s a load of rubbish:

After years of crying for Arsenal to get a defensive midfielder, Arsene Wenger lucked out with Francis Coquelin. He then purchased Mohamed Elneny. And Granit Xhaka. While only one of those is a true defensive midfielder, that’s as good as you’re going to get from Arsene Wenger who prefers his players to be mutli-positional. He isn’t buying another, at least not in January when we have zero need.

He’s hardly had a chance at Roma

Signed in 2015 after a successful loan spell from Boca Juniors, the 22-year-old spent last season on loan with Empoli. Since returning this summer, he has played in 10 Serie A games. The Sun, who were running this report, claimed in at least three different places in their article, that he played for Torino last season. He didn’t. 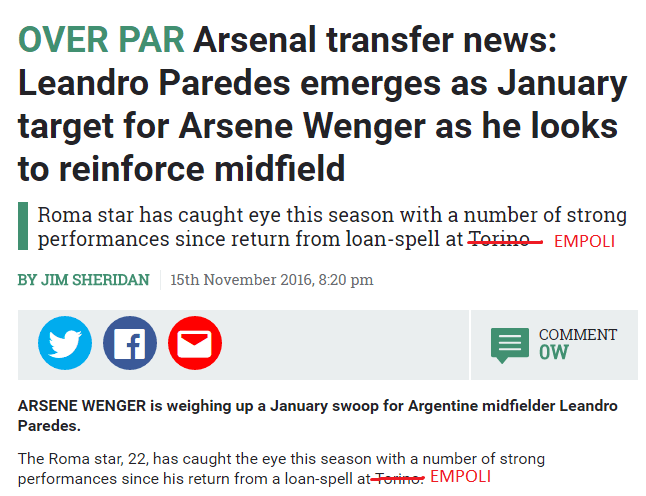 Anyway, he a regular starter with Roma now, why on earth would he be looking for a move?

The Sun can’t even get his club history right, something you can check with one Google. Are we supposed to believe them when they say Arsene Wenger is considering moving for him in January?

The reasons don’t stack up

The Sun claim Arsenal are considering moving for him because Wenger wants some younger players for midfield. You know, because they don’t already have a ton of those already, so many in fact, that an unheard of player called Jack Wilshere had to leave to get regular playing time.