The midfield configuration in Carlo Ancelotti’s great Milan side had the technical prowess and brains of Andrea Pirlo at the base, Gennaro Gattuso as the pitbull ballwinner slightly ahead of him, and then the creative spark of Kaka as its number 10.

Gattuso’s limitations with the ball at his feet were accommodated for by him being situated between two fine technicians and developing his tactical understanding and working out how he could best facilitate their game.

Gattuso helped his teammates by making decoy runs, drawing opponents to him, and generating a gap for Pirlo to pass through or Kaka to drop off into and receive the ball in space. Unlike his teammates who looked to manipulate opposition defences with their use of the ball, Gattuso did so through his work without it and movements off the ball. He was aware of his limitations, but worked on another way he could help.

An example closer to home is 2007/08 Arsenal, where Mathieu Flamini would draw men to help create space for Cesc Fabregas to move into. Sami Khedira has also done this to excellent effect for both Real Madrid and Germany to help Mesut Özil.

On Saturday, Francis Coquelin was unable to do this and it was one of the contributing factors for Arsenal dropping two points against a Middlesbrough side they should have beaten.

With Santi Cazorla injured and Granit Xhaka suspended, Arsene Wenger elected to pair Coquelin with Mohamed Elneny. Some of the arguments in favour of the midfield pairing were that they’d effectively shield the back four and that Arsenal should have enough in the front 4 to break down Middlesbrough, with a bit of support from the fullbacks.

However, when you’re trying to chip away at a wall of 10 men, you need all the help you can get and neither Elneny nor Coquelin contributed enough with or without the ball to help break Middlesbrough’s stern resistance.

‘But that’s not their job’ you may contend. ‘They win it back and give it to one of the more creative ones.’ Well, while it may not be expected of them to personally bisect opposition defences with precise through balls, there are measures they can and should undertake to try to pull opponents out of position to make things easier for their teammates.

On Saturday, another midfield body making a convincing line-breaking decoy run would have dragged a Middlesbrough player away, creating space and time for a teammate.

Alternately, this midfield runner making a well-timed run into good position inside the penalty area from which they themselves could shoot would have provided an alternate favourable option. This is just one of the reasons why Arsenal miss Aaron Ramsey so much. 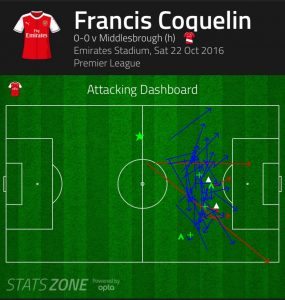 This lack of midfield support had a knock-on effect felt throughout the whole team as Arsenal’s front 4 were somewhat cut off from the rest of the team. The wide players both came very narrow looking to influence play, Alexis and Özil were unable to find the pockets of space they like to get into, and it was all a bit congested and chaotic. 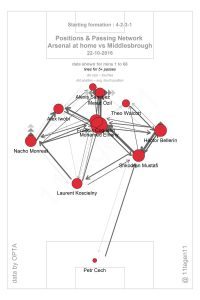 Alexis Sanchez is a chaos factor. He is a high risk, high reward livewire of a player with the ball at his feet. This is demonstrated by his goal and assist stats in his time at Arsenal, but also by the amount of times he turns the ball over.

His chaotic movements sometimes throw defences off and work in Arsenal’s favour. On other occasions, like Saturday, it’s his own teammates he confuses, and as such, the likes of Özil and particularly Walcott are unsure where to look for the Chilean and are also forced to alter the runs they themselves would look to make.

While Arsenal struggled to break down Middlesbrough, it wasn’t for wont of trying. There was a plan, it just wasn’t an effective one.

Elneny attempted to manoeuvre Middlesbrough’s midfielders around by engaging in some cute 1-2s, passing and moving, with the idea that it would force opponents to go with the runner, opening up spaces for his own teammates to run into or pass through. 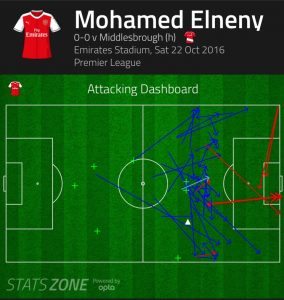 Given how compact Middlesbrough were, he may have been better served to combine this approach with a few more quick, direct, zipped balls to the fullbacks, just to switch it up and keep the opponents on their toes. While Cazorla himself is not without his limitations, this was just one of the ways in which Arsenal missed his guile at the base of midfield when they were in possession.

As the superior technician of Saturday’s midfield pair, Elneny was tasked with playing deepest, in Cazorla’s role. He was thrust into this role as a result of circumstance and would ideally be used higher up, where his energy could be better strategically utilised to win the ball back high up when Arsenal are counterpressing.

Although Arsenal struggled to create chances on Saturday, the counterpressing was encouraging, winning the ball back on numerous occasions in the attacking third, preventing Middlesbrough playing out and alleviating pressure. There were occasions where you’d see three or four Arsenal players around the visiting player in possession.

The issue when pressing goes wrong and the opposition do manage to play out and evade that first wave is they’ll have a chance to run 3 v 3 at your defence. Boro got in a few times on the counter and with better finishing or a less accomplished display from Petr Cech, they could have scored three times.

This season, Wenger appears to prefer a technician at the base of the midfield, placing more emphasis on the first pass out of defence. The way that the team has evolved this season, Coquelin’s job is categorically not to be the deepest midfielder, a screening player, or to mop up immediately ahead of the back four. He is being deployed higher up where his energy and aggression can be channelled into trying to win the ball early, and on the occasions when he overcommits and is bypassed, there’s still a midfielder behind him to slow down the opposition’s counter attack long enough for the fullbacks to retreat.

This is how the situation leading to Xhaka’s red card against Swansea arose. Coquelin went in for the first challenge, failed to effect play, and then left his partner retreating, who then made a poor decision of his own. While Cazorla’s ball skills ahead of his back four were missed, his lack of pace, which can leave him looking vulnerable against the counterattack in the final 25 minutes of matches may have presented a fresh issue against Middlesbrough’s sprightly counters.

In matches where Arsenal look to press and win the back in the final third, Wenger likes his second midfielder to be energetic. If Coquelin is to persist in this role, he needs to smarten up and add decoy runs to his repertoire, or work on the technical side of his game so that he could be a factor and not just a spare part or active hindrance if he has the ball at his feet in the final third.

When the substitutions were made, Wenger’s deference to seniority was evident, with Iwobi hooked. Perhaps it would have been better to shift Iwboi’s guile into central midfield, use Oxlade-Chamberlain wide, looking to get him 1-v-1 against the fullback.

Instead, Ox’s dribbling was utilised in central areas and it didn’t quite work. However, given the limited options on the bench, there wasn’t much else that Wenger could have done differently to alter the course of the game.

Like at Burnley, the match situation with 20 minutes to go was crying out for Olivier Giroud for Arsenal to play the ball up to, to lay off or flick on to an onrushing runner.

Fortunately for Arsenal, both Giroud and Ramsey are back in full training ahead of the trip to Sunderland, who will likely look to employ the same tactics as Middlesbrough, with games between Moyes and Wenger’s teams being typically tight and cagey affairs since the 1-6 shellacking at the start of the 09/10 season.