Per Mertesacker has written his first set of notes for the Arsenal matchday programme and it’s safe to say he’s more than a little chuffed with the whole thing.

The favourite to be promoted to captain after Mikel Arteta left, many thought that was unlikely to happen after he picked up an injury that would rule him out until the final six months of his current contract.

But Arsene Wenger stuck with the BFG, knowing that his influence off the pitch could be just as useful as it is on it.

“These are my first programme notes and I wanted to start by explaining what a huge privilege it is to be made captain at such a unique club, and especially by a manager like Arsène Wenger,” Per said.

“I’ve loved being at this club over the last five years. We’ve shared some really special times but for me, being named captain is the absolute peak. Now I want to make sure that we are successful as a group. I really will give everything for that. I’m going to give my all to make you proud of me too and I feel confident that I can have a great season as captain. 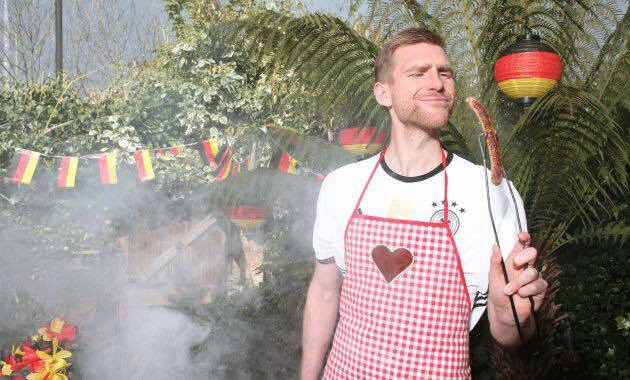 “The boss making me captain despite my current injury gives me massive motivation to come back. But it’s important for us to have lots of good leaders and big characters around, guys who take responsibility.

“I’m really encouraged by what we’ve built in terms of team spirit over the last couple of years. Young players have stepped up and have helped with that too, so it’s not just the more experienced guys leading the way. Look at Rob Holding – his performances since coming into the team are evidence of that.

“We’ve got great competition here and I think we have all the attributes to be really successful this season.”

We have yet to hear if Arsenal are going to offer Per a new contract and we can assume given his absolute joy at being the captain of the club that he would sign up in a heartbeat.

Still only 31, we could well see him offered a new two-year deal which would keep his experience around while Rob gets more and Shkodran Mustafi beds in.

If not, we’ll be looking for yet another captain, our ninth since Tony Adams left in 2002.

Since then, no player has worn the armband for more than three seasons.