So will we see Shkodran Mustafi or Lucas Perez start? Arsene Wenger wasn’t up for giving us any clues at his press conference when he said he hadn’t decided if either would play.

This, of course, makes predicting a starting XI incredibly tricky. When you throw in the fact that Alexis Sanchez only landed back at the club on Friday after his trek across the globe, the number of midfielders Wenger has got to fit in and it starts becoming like trying to predict the lotto.

But let’s give it a go anyway.

In goal, we will see Petr Cech. That’s an easy one. As are the picks for three of the back four – Nacho Monreal, Laurent Koscielny and Hector Bellerin will certainly start the game unless they lose a leg between now and kick-off.

So does Wenger pick Mustafi or stick with Rob Holding who has played so well and deserves to start? It really could go either way, but while I was initially leaning towards Holding keeping his place, I’ve now talked myself round to Mustafi.

Now to the midfield minefield. Granit Xhaka is shoe-in, but what of his partner? Does Wenger try out Mohamed Elneny alongside him or go with Le Coq? I’d far rather see Elneny than Francis, so that’s what I’ve opted for although part of me says that we could see Santi back there as well.

In front of those two, Theo will likely keep his spot with Mesut Ozil and I fancy we will see Lucas deployed on the left as we rest Sanchez and start Giroud.

Confidence level in this lineup 25%. 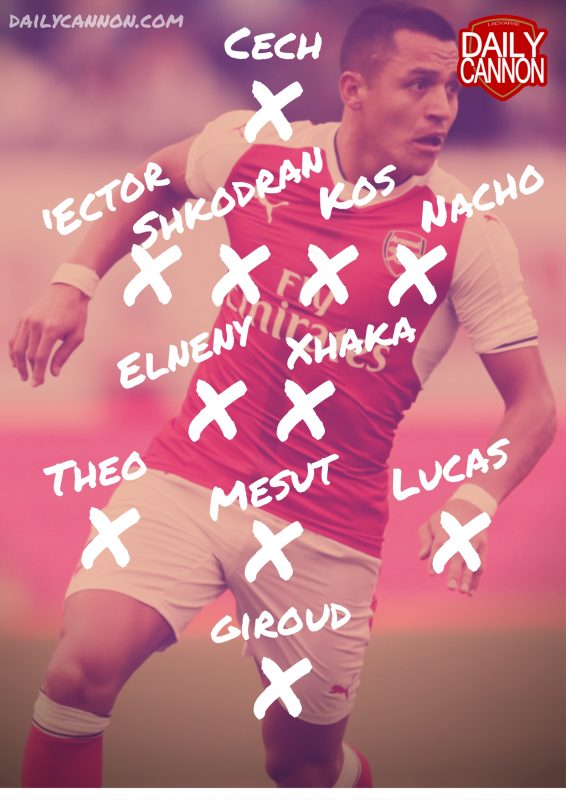