You might have noticed, but the press are so happy that Manchester United signed Paul Pogba they’ve hardly been able to stop touching themselves long enough to vomit out reports about his magnificence.

Contrast that to Mesut Ozil who arrived and was almost instantly under pressure to deliver more because of his price tag. It took hardly any time for him to be accused of ‘nicking a living’ and for the press to demand more, more, more.

So you’d think, then, that after just a couple of games, Pogba must be really tearing it up, especially compared to Mesut Ozil who is ‘lazy’ and ‘disinterested.’

Well, Pogba certainly does like to express himself on the pitch, with his face and wild shots if nothing else.

So, this tweet that was doing the rounds, might come as a surprise to you (if you’re an Arsenal fan it won’t come as any surprise at all) 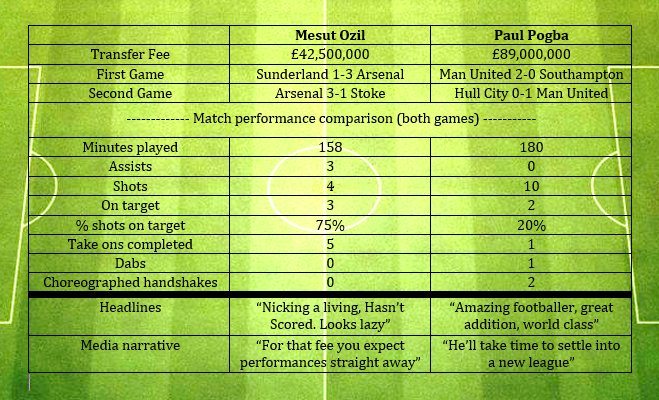 And before the United fans starting getting their boxers in a twist, no-one is having a go at Pogba. This isn’t about Pogba. This is about the media, their blinkers, and their treatment of Mesut Ozil.