Mark Clattenburg, the referee with a Champions League tattoo who is regarded as the best referee in England, will take charge of Arsenal’s first ‘must-win’ game of a season that will only be two games old this weekend.

The chief celebrity ref, Clatts is always aware that he’s on TV, and probably thinks he is when he isn’t. Sometimes it seems like he cares more about his gestures for the cameras than actually making the calls he needs to.

So how have Arsenal fared under him recently?

Well, there was this for a start:

Last season, Clatts took charge of four Arsenal games and we won two, and lost two (W v Everton (a), Villa (h), L v West Brom (a), Chelsea (h)). The Chelsea game was the one which saw Per Mertesacker sent off:

During all of the games last season, he issued a total of 10 yellows and one red, with only three of those yellows going to Arsenal players (and the red). Somehow, in the Everton game which is shown above, he produced not one single card.

He also refereed four Leicester games in the league last season and they managed to win three and draw one, but that doesn’t tell us much – Leicester only lost one Premier League game all season that didn’t involve Arsenal, after all. He issued eight yellows in those games (no reds) 50% of which went to Claudio Ranieri’s men.

Compared to others, Clattenburg is not a bad referee.

He has a habit of getting some big calls wrong, but show me a referee that doesn’t. I wouldn’t be quick to pick any Premier League ref as my personal choice if I could avoid it, but if you forced me to, with a gun at my head, I’d probably pick Clatts.

Thanks to his jolly in France over the summer, this will be his first match of the season.

Hope he remembers to do his hair. 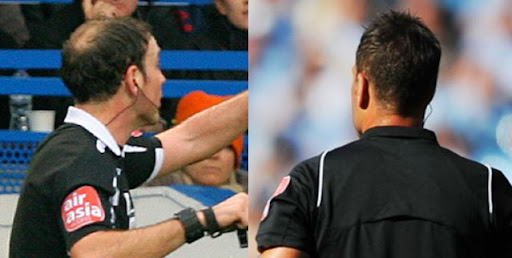