There was a story doing the rounds on Thursday that Arsenal were considering offering Napoli Olivier Giroud and a bucketload of cash for Gonzalo Higuain.

We don’t, for a minute, see this deal happening. Swap deals rarely ever come to anything and while Higuain won’t sign a new deal with Napoli, I don’t see much point to Arsenal shipping out their main striker when they need MORE players in that position not fewer.

If Higuain was to arrive (and that’s a big, uncertain ‘if’) it would most likely be in addition to the Frenchman. So what would that bring to the side?

Well, KickOff have helped us out by comparing the two players.

As much as we love Oli, his numbers just don’t match up at all: 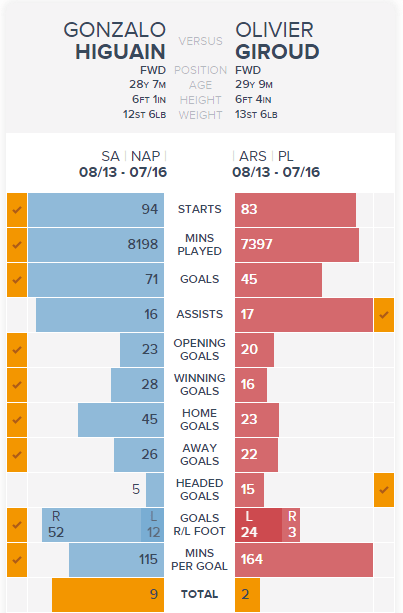