The summer transfer window opened just a few days ago, and many transfers have already been made in the Premier League.

Arsenal fans, naturally, wonder when will we sign anyone? The shopping list among them is long, as always, but I’m not going to go into that. Times are crazy and everyone expects big spending on maybe not very necessary or fitting players. But everyone is doing that!

Well, Wenger does it too. Shocking, I know! I took a look back at 20 years of Wenger – 21 summers if you count this one. He had quite a lot signings, some good some bad. He rarely spent a lot of money, compared to our rivals, but his players often were much better than some expensive transfers others made.

Our most expensive signing was our currently best player Mesut Özil, and even he was less expensive than many are these days. Wenger was looking at every penny over a few years and even made as little as one signing one summer.

His average spending during the summer transfer window is £21million. That includes our latest signing, Xhaka. Wenger got quite a few players on a free transfer. They sometimes worked out but sometimes not. And, some had two chances.

Wenger usually signs younger players, around 24 years old. The youngest was Cesc Fabregas at only 16 while oldest was John Lukic in Wenger’s first summer. If we don’t count that, next is Jens Lehmann.

All of this and more is listed in the graphic below. Who knows, maybe the average spending will jump up at the end of this summer. 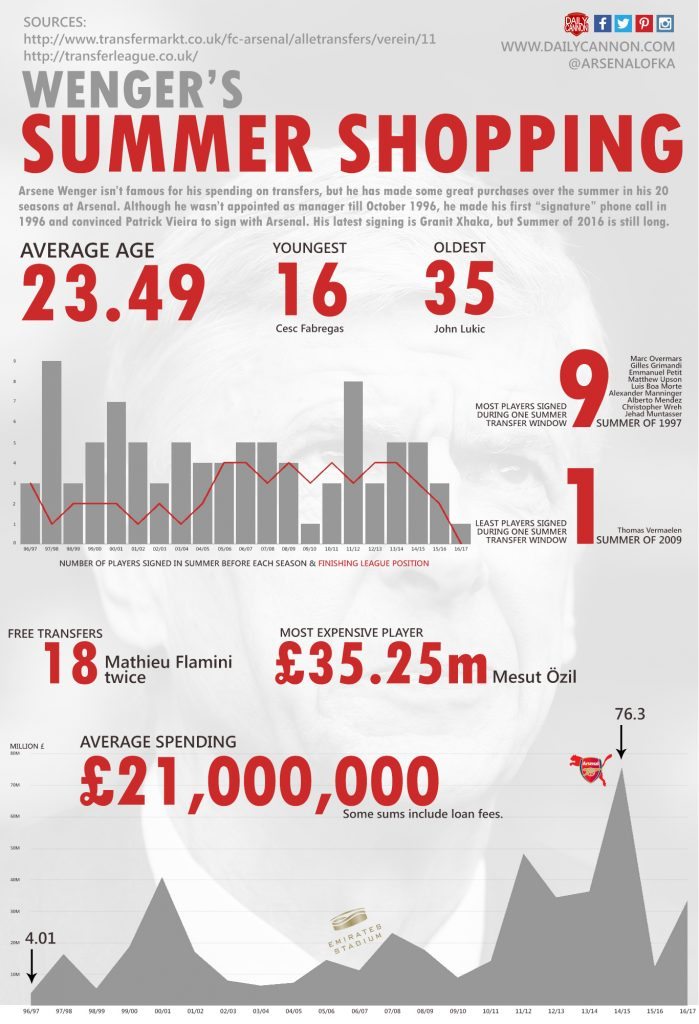