Arsenal have allegedly offered up to €40m (€30m + €10m bonuses) for Shkodran Mustafi who has got married in ‘secret’.

With Arsene Wenger confirming that the club will [try to] buy a central defender after Per Mertesacker’s knee operation, despite being heavily linked with a central defender purchase beforehand, this is not a rumour we can dismiss out of hand.

The report, which appeared on a number of sites in Spain cite Sky Sports as their source and the media giants say that they got their info from Sky Germany. In trying to find the link to the German piece, I came across other articles saying the 24-year-old married his girlfriend, Vjosa Kaba, in ‘secret’. 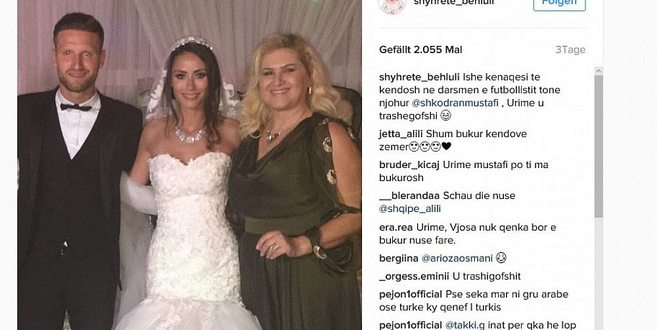 The newlyweds partied with 350 guests [massive secret] in the Hotel Izgrev in Gostivar. Koba, a model once voted the most beautiful woman in Switzerland, is Albanian like Mustafi’s parents.

As for the rumour that he’s a major defensive target for Arsenal, there could be some truth to it although it is still hard to get my head around Arsene Wenger offering to pay this sort of money for a defender.

It would, however, not be an expensive transfer in the long-term. The German international has at least another 10 years left in him and hasn’t yet hit his peak playing years.

Mustafi has a release clause of £42.1m although many rumours have claimed he would be available for around £25m. If that is the case, that would fit with what Arsenal have reportedly offered.

One to keep an eye on, for sure.