10 years ago, Tomas Rosicky was the man chosen to fill the Robert Pires sized hole in the Arsenal first team.

It was a, soon to become rare, case of Arsenal immediately replacing a departing star with another one. Incidentally, I don’t know about you, but it boggles my mind that it is now 10 years since Le Bob departed north London- how can this be?

Anyway, Tomas took Pires number 7 shirt and set about replacing the Frenchman in the hearts and minds of the Gooner Nation. I think it’s fair to say that both the player, and his new manager were quite excited about this move.

After his signing was announced, Tomas had this to say, “I’m really happy to be here at Arsenal, it is a great day for me. This is the best club in Europe and I will give everything.

“The team showed their strength recently in the Champions League and have big potential with a lot of young players. I think we can be even better next season.”

Best club in Europe, you say?

Tomas, we loved you already.

In fairness, we had just contested, and were very unlucky to lose, the Champions League final.

So he had that bit maybe right, better next season though? Well…

For his part, Arsène Wenger said, “We are delighted to welcome Tomas to our squad.

“He has great technique, skill on the ball and sharp passing.

“Tomas has good experience at all levels for club and country and we look forward to welcoming him to Arsenal after what will hopefully be a successful summer for him at the World Cup.”

Arsène, possibly the only man in France to appreciate a tricky little midfielder even more than a fine wine, described his new midfielder perfectly. I think, whatever your views on Rosicky’s overall contribution to the Arsenal cause, you would agree with his assessment.

Having scored an absolute belter against us for Sparta Prague in the Champions League, Tomas was already known to Arsenal fans. He followed that up with another one in the World Cup. I don’t think there was any fear that we had signed a Czech version of John Jensen though.

Once Rosicky had landed in north London he seemed to settle quite quickly.

It’s difficult to look back 10 years and remember specific examples, but in addition to him opening his Arsenal account in our first Champions League game of the season, I remember a brilliant goal from distance at Liverpool in the FA Cup. The same game in which Thierry Henry humiliated Jamie Carragher for the last- but not the first- time.

On the pitch, at least.

It was the following season, with Thierry departing and a new team growing into the gap left by the Frenchman, where Rosicky really began to flourish.

I went to several games that season, either with [my girlfriend] Jo or my mate Ben (hello, Ben!) in block 6 and the team was producing some marvellous football. We’d racked up something like 60 points before the end of January.

We all know the answer.

People now point to the trauma inflicted by Martin Taylor’s leg-breaking tackle on Eduardo and the last minute Birmingham penalty as the moment our title challenge died. I wouldn’t go so far as to call these people wrong, although the dying of Adebayor’s light was certainly a factor – as was yet another injury to the terminally-afflicted Dutch Judas.

There was also what, at first, appeared to be a relatively minor injury sustained by Rosicky in an FA Cup match against Newcastle. He limped off after 10 minutes with a hamstring tear.

Nobody realised at it the time, but despite Dr Wenger’s initial “days, not weeks” prognosis, the tendons in Tomas leg had come away from his hamstring. Rosicky would not be seen in competitive action again until an infamous match at Manchester City in September 2009 and, in his absence, Arsenal went from title challengers to also-rans.

By the time he came back, his former team mate, Emmanuel Adebayor was representing the opposition and treading all over the Dutch Judas face (how much we’d all like to do that now, eh?), Alex Hleb had taken his ice cream off to Barcelona and project youth was in full swing.

In short, things had changed.

Nonetheless, four months after his return from injury, Rosicky was awarded a new contract.

He made 33 appearances that season, having combined with the equally unfortunate Abou Diaby for a late winner against Liverpool.

The following season, I think the sense of what might have been for the player dubbed the “Little Mozart” really was heightened. The team was, by then, clearly built around Cesc Fabregas, but in that 2010-11 season, Samir Nasri was the best player in the league – for about three months anyway.

The perma crock, van Persie, also got himself fit, finally, and returned to the team in blistering form. It felt like Rosicky’s time had come and gone. For a player of Rosicky’s undoubted quality to score just once – against Leyton Orient – in 34 appearances… well, I think people were starting to wonder what the point of him was.

In fairness, it should be said 15 of those appearances were from the bench.

I remember making my way, with James Craddock, to Arsenal on a February morning in 2012 and getting a text from Asa Joseph. I can’t quote it directly now, but it read something like, “Benayoun and Rosicky in, I’m going home”.

As it happened, Rosicky scored what turned out to be the winning goal in what has to be the most euphoric match ever played in the North London Enornodome.

What’s more, it was a goal his effervescent, lead from the front performance totally merited. By the end of it, Arsenal had destroyed their north London neighbours, 5-2.

Belatedly, Tomas Rosicky, like the previous wearer of the Arsenal number 7 shirt had found a new role in the Arsenal squad; tormentor in chief of Tottenham Hotspur. It coincided with something a Ronaissance – sorry – he was now playing his best football for years.

We all thought that we would see the end of Tomas as an Arsenal player last summer, but he stayed yet injury struck, cruelly, once again, allowing him just one senior appearance in his final season.

It was a timid end to his Arsenal career, but an apt one, I guess.

The mark Rosicky made on Arsenal will not be forgotten. Just imagine what he could have done have he been fit more often than injured.

Thank you Tom, good luck wherever you end up. 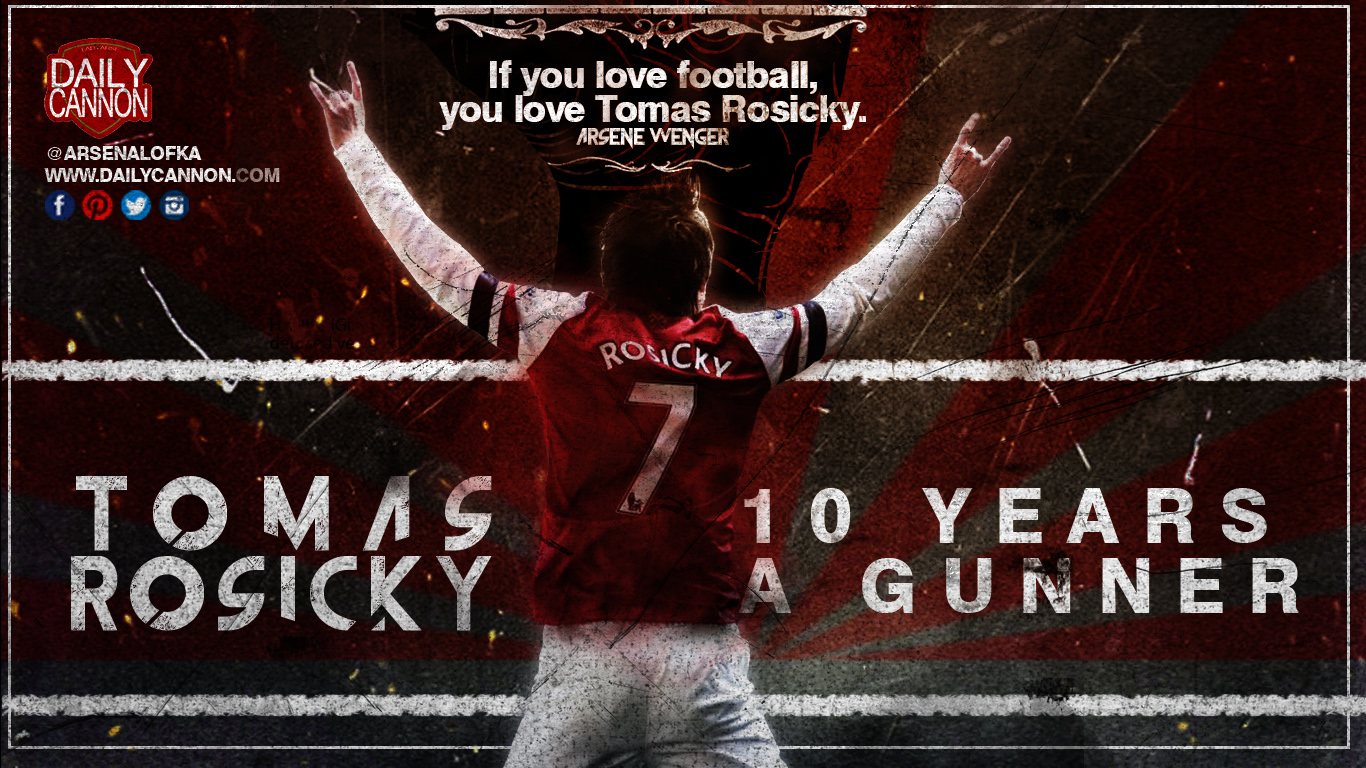