Jamie Vardy has revealed that he has no problem ‘shutting out’ the transfer speculation surrounding his future as he concentrates on the Euros with England.

As news emerged on Friday that Vardy’s dithering could cost Arsenal more money, and the Leicester owner saying he’s confident the player will stay, speculation regarding his future has not died down despite the Euros being underway.

Now, speaking to the Mail, the Leicester man said ‘‘It’s been easy (to shut that out).

“I’m here to concentrate and focus on England and that’s all I’m going to be doing.” 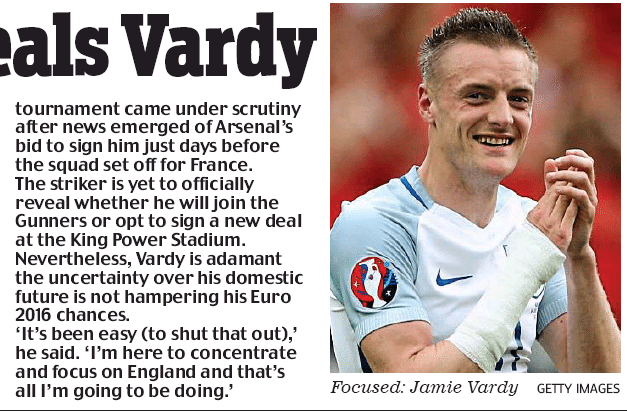 Also speaking on Friday, Leicester’s vice chairman, Aiyawatt Srivaddhanaprabha, said “You will see the news very soon. But I think he will stay.

“I think, so let’s see. We need to build the team.

“We keep continuing to believe that we can do something special in the Premier League and the Champions League.”

From the start of this transfer rumour it has always felt like the longer Vardy waited to make up his mind the more likely he would be to stay at Leicester.

That being said, if he had decided to stay, why not just come out and say it? What benefit would there be to him keeping quiet if he has no intention of going anywhere?

If he has decided to join Arsenal, however, keeping quiet could be a matter of respecting Leicester and allowing them to have player who is scoring goals at the tournament, thus increasing their profile.

But, as with many things that uncertainty lies at the heart of, without all the facts, it’s impossible to know one way or the other and all we’re doing at the minute, like most, is guessing.

Vardy also revealed, in his interview with the Mail, that he doesn’t go to the gym and has no intention, it seems, of starting, “The last time I lifted a weight? Probably that can of Red Bull the other day, he added.

“I don’t go to the gym, if I did it will slow me down. I don’t go in for weights or anything like that. ‘Each and every person is different and this is my way, and I’m sure if someone else tried doing what I do then it probably wouldn’t work for them. People have tried to drag me in but they’ve tried and not succeeded.”

He also spoke about being pictured carrying chewing tobacco and Red Bull recently (because, you know, it’s not like there’s a major tournament on that the press could talk about instead), and said “‘It’s just something I’ve always done and they’ve been checked with the medical team and there’s nothing wrong with them.

“I wouldn’t call it a diet, the Red Bull was just to wake me up in the morning. It’s just standard me, a bit of Red Bull. It’s not a regular thing whereby I have a Red Bull every morning.”

Arsenal give staff pay rise as recognition of work during pandemic