A last minute penalty meant the Czech Republic managed to earn a point when no one thought they could but unfortunately, crowd trouble overshadowed it.

In the first half, Petr Cech was vital for the Czech Republic. It was all Croatia and he was forced into a few saves. Fortunately his experience meant he had command of his area for the most part – just 28 minutes and Croatia had had eight shots while Czech hadn’t had any.

Unfortunately, however, in the 37th minute, Croatia scored via Perisic. There wasn’t much that could have been done.

In the second half, the Czech Republic managed to warm into the game a little and even got forward.

52 – CHANCE! Czech Republic have their first shot on target as Krejčí hooks an effort goalwards, but Subašić gathers it. #EURO2016 #CZECRO

Despite Croatia playing considerably deeper in the second half, they still managed to go 2-0 ahead in the 59th minute thanks to a gorgeous chip over Cech from Rakitic.

Croatia continued to attack at will and although Cech did his best and continued to make simple saves, his country looked in trouble.

The Czech Republic managed to get a goal back out of nowhere from a Skoda header, which came from a Tomas Rosicky ball whipped into the area.

Unfortunately, the match was stalled for several minutes after flares and then fights broke out amongst the Croatian supporters.

Ironically for them, when the game kicked-off again and therefore had time to catch up on, the Czech Republic were given a penalty and equalised. 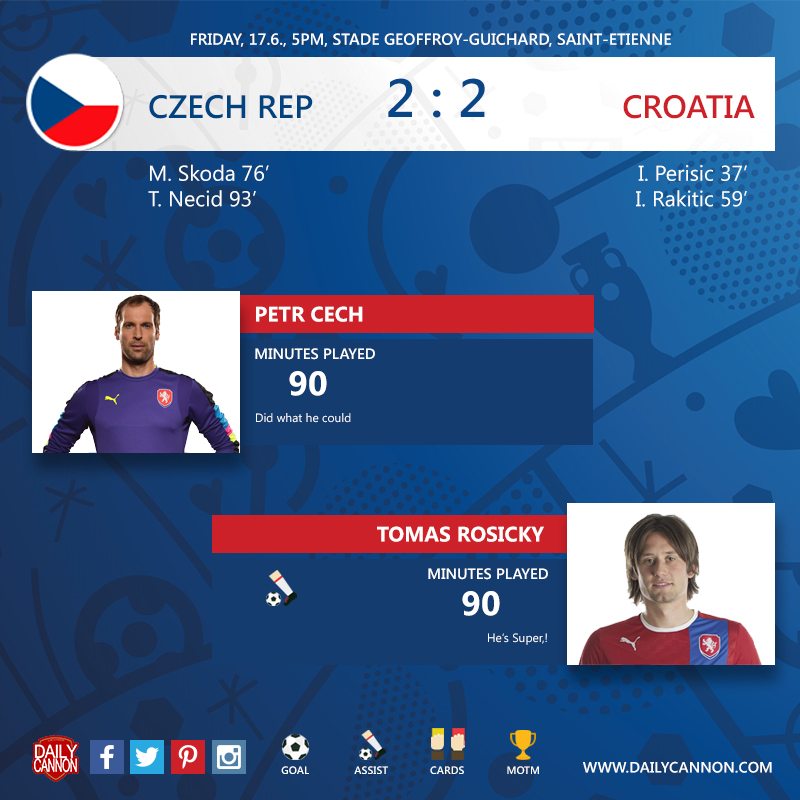