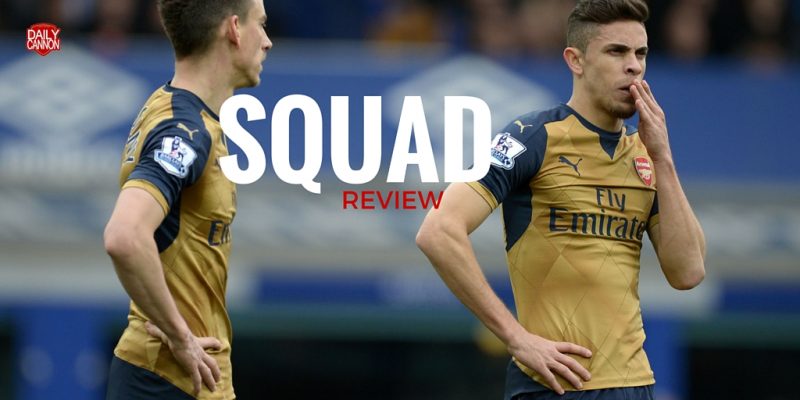 The season is over, but who were the heroes and villains of Arsenal’s campaign?

We’ve decided it’d only be fair to go through the squad and have a look at who let us down or who really gave us moments to remember during a hit-and-miss campaign.

We’ve already looked at the goalkeepers, but what about our centre-backs?

The campaign was a mixed one from the Frenchman, who started superbly. With his defensive partner changing between Per Mertesacker and Gabriel, the 30-year-old was a constant and his consistency helped Arsenal impress.

After the defeat of Manchester City, the defender struggled for form, giving more than iffy displays against Southampton, Liverpool and Chelsea.

He returned to something like his best after Arsenal were knocked out of the Champions League but an unconvincing partnership with Gabriel left taints on his campaign. A late season run of form was encouraging and, hopefully, he’ll show more of the same alongside a steadier partner at Euro 2016.

Mertesacker has found himself out of the side a lot lately. Over 30, he does appear to be declining, but his performances this season deserve more credit than they’re received.

A single booking in 36 appearances tells you everything you need to know about his temperament, his decision making, and the timing of his challenges.

Per excels with these tackles.

Nonetheless, a decline is clear and it will soon be time for Arsenal to look forward.

The red card in the defeat to Chelsea seems to have tainted many opinions of the defender, possibly even that of the manager, but the results have suffered without him in the backline and the entire team appears to lose composure when he’s out of the side.

His calming influence is also still important playing the ball out from the back and, hopefully, he can come back to top form after the summer off.

After barely featuring during his first half a season in north London, Gabriel has had two runs in the team to try and prove his worth to the fans. So far, he’s been very unconvincing.

The Brazilian is a strong defender, happy to charge out of the backline to intervene. Sometimes too happy to do so.

Though his pace is a big selling point over Mertesacker, he isn’t the best in one-on-one situations and his temperament is questionable and he cost Arsenal early in the season when he was distracted by Diego Costa’s silly games.

Another poor performance in a big game came at Old Trafford and Andy Carroll truly taught Gabriel a lesson at Upton Park. Arsène Wenger, however, seems determined to make a combination with Koscielny work.

With both players over the age of 30, moving on from the excellent Mertesacker-Koscielny partnership does make sense. Based on the evidence we’ve seen so far, it doesn’t make too much sense to move on with Gabriel.

There’s a lot of raw talent there, sure, but it hasn’t been harnessed properly yet.

Chambers didn’t feature enough to earn a grade, and that’s really the shame about his season, which can be summed up with a number of halves.

The first half of the home game against Liverpool saw the defender struggle. It was his first appearance of the season and probably the one which dissuaded Wenger from using him too often, due to his nervousness. What has gone a little too under the radar is his second half from the same game, where he regained his composure and recovered superbly.

Another strong half was in the home game against Leicester, when the boss was forced to use him. Dropped after a good midfield performance against Bournemouth, Chambers was excellent against Jamie Vardy and co., keeping his nerve and marshalling the defence well.

Incredibly, he played just four more Premier League minutes all season. Chambers is a huge talent and really appears to be a natural replacement for Mertesacker. Hopefully there’s more to come next year.