Arsenal’s value has increased by an incredible 54% in the last year, taking it beyond the $2bn mark.

Still repaying loans for the build of the Emirates Stadium, Arsenal still have some debt to clear but are in a better position than Manchester United, who were left with the debt of the Glazier family, who borrowed an eyewatering sum in order to purchase the club just over a decade ago.Bayern Munich, Barcelona and Real Madrid, a fairly significant

The Gunners are clearly behind the top four in terms of revenue, where Manchester City and Paris Saint-Germain also outdo the Gunners, but the increase in Arsenal’s value over the last year is at an incredible 54%. 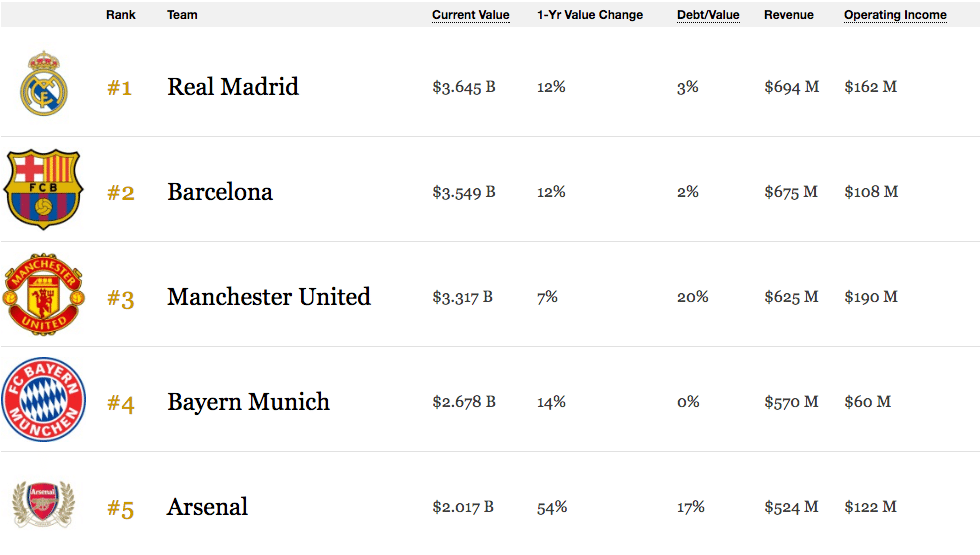 More money would be made from television revenue in Europe if Arsène Wenger’s side could progress beyond the last 16 stage of the Champions League but a huge increase in TV revenue for Premier League sides will only see Arsenal’s value rise.

With the club third in the Premier League and failing to make it deep into the Champions League once again, fans and the media will put plenty of pressure on Arsène Wenger and co. to spend big this summer to right the wrongs of a disappointing campaign.

Publishing results like this, there’s no excuse not to.