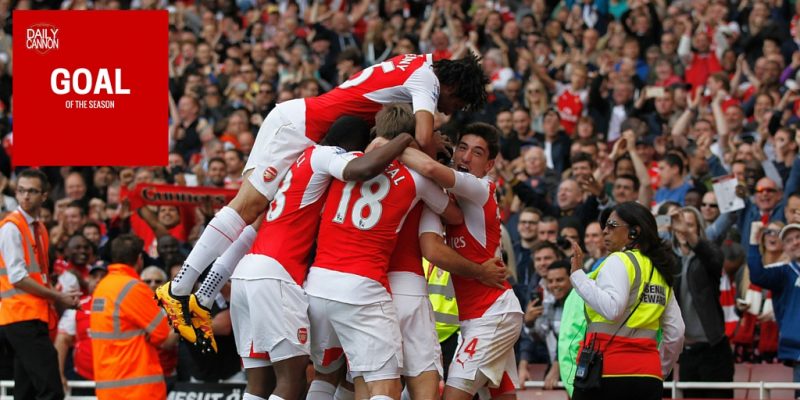 During Arsenal’s 2015/16 season, we scored 90 goals in all competitions (91 if you include the Community Shield) but which was our best one? We put it to you.

As usual, it was difficult to pick just one so we tweeted out a shortlist on Monday to see which goal you preferred.

Although it wasn’t on the list, Danny Welbeck’s goal against Leicester City at the Emirates was mentioned a lot, with good reason. The striker had just spent 10 months on the sidelines through a knee injury that was only supposed to keep him out for a couple of weeks. Surgery and resulting complications meant that his introduction against the Foxes in February, while the score stood at 1-1, was his first appearance of the season. And boy, what an appearance.

With just seconds of stoppage time left on the clock, Leicester conceded a free-kick several yards to the right of their box. Mesut Ozil took it and delivered it perfectly onto the head of Danny Welbeck, who headed it into the net. The Emirates erupted. Welbeck leapt into the crowd and we left with three points and a real shot at the title. At the time, it was our most important goal of the season.

Although Theo didn’t have a great season, only scoring nine in all competitions, his goal against City at the Emirates back in December was something special.

The forward received a neat little pass from Mesut Ozil on the edge of City’s area, dribbled it a couple of feet, before smacking it with his right boot. The ball flew into the net with Joe Hart somewhere near it.

If you listen to most people, Giroud is a complete flop. However, this flop scored 24 goals this season. This isn’t to say that he didn’t have rough patches, we all know he did. But he’s not half as terrible as people make out, not by a long shot.

Despite losing 5-1, his goal against Bayern Munich away was stunning. It showed how, when he’s on form, his instinct for goals is sublime and his finishing can be superb. His control of the ball and subsequent scissor-kick was fantastic to watch, it’s just a shame that the goal itself was overshadowed by the poor result on our part.

Although the Chilean scored two stunning goals against the Red Devils at the Emirates, the first being a clever side-heeled flick, the second was beautiful.

We were already 2-0 up within 17 minutes thanks to the forward and Mesut Ozil, and the third and final goal of the afternoon put the icing on the cake.

Alexis received the ball from Walcott in the centre, dribbled it past two United players before hitting it with his right boot into the goal. It was a proper screamer and, at the time, a sign of what we hoped was to come.

In first place by a slight margin was Flamini’s second goal against Spurs in our 2-1 Capital One Cup win at White Hart Lane.

The midfielder scored both our goals that glorious day and although he’s not everyone’s favourite player, I’ll always remember his second – a stunning volley in front of the travelling Arsenal fans.

As a couple of people pointed out on Twitter, it wouldn’t be right to not include Danielle Carter’s FA Cup goal against Chelsea on Saturday. The goal won the Arsenal Ladies the match, which took place at Wembley, and was a proper worldie. It meant that our Ladies take the trophy, despite being the underdogs.

What was your Arsenal goal of the season?