A few years ago, I wrote an article about the Y word in football and why it had to go.

My basic summary was that once people accept that Tottenham fans are ‘Yids’, and that Tottenham are bad (because you support a rival club), then you naturally leave space for people to make chants about Yids being bad people because, obviously, they’re singing about Tottenham fans.

Every week, whether home or away, we’re still expected to sit back and listen to other Arsenal fans chanting “Yido” in an abusive way at the end of certain songs. But of course, they’re just singing about Tottenham fans. And as much as I hate it, I do believe that’s true for the majority. In fact, I used to believe it was true for all Arsenal fans. Surely nobody would mean otherwise?

I held this view for a while, until I had my worst ever experience as a football fan – one that ruined a day that should’ve been one of the most memorable trips I’ve been on.

We were in Dortmund, on a train to the stadium along with a load of other Arsenal fans. Everyone was singing and the mood was pretty friendly. Fans were reeling off song after song, and that Spurs chant came up. And, as is always the case at away games, the “Yidos” part at the end was sung more loudly and more aggressively. I said nothing.

Shortly after, the Giroud song started up. A man next to me, instead of singing “Giroud” at the end of the song, creatively changed the words to “gas Jews”. On a train. In Germany. He then hissed at the end of each chorus. I literally had no idea what to do, and to this day I’m surprised that I even managed to confront him. I tapped him on the shoulder and asked him what he was doing. He said he was just singing. I told him I was Jewish and asked him not to sing those songs.

His response was to tell me that if I was Jewish, I shouldn’t be supporting Arsenal.

He then continued to sing these songs loudly and hiss more vociferously for the rest of the journey. I’ve never felt so dejected, or so worthless in my life. On a train, surrounded by fellow Arsenal fans, I felt like an unwelcome outsider, and I felt threatened. We got off the train and I told my friends what had happened. People tried to find the man, but to no avail. I couldn’t give a shit that we beat Dortmund, I just wanted to go home.

In the years since, I’ve heard chants at games. I’ve heard reports of things being sung at away games, and we’ve even had prominent figures in sport come out publicly to condemn the use of the Y word and try to raise awareness of anti-Semitism in football. Once again, it remains the only form of racism (discussed here) that is for some reason acceptable in modern football. Why? Why does it go unchallenged? Why do seemingly-educated people think it’s ok or funny? Why is nothing done about it? Why do fans stay silent?

All these questions obviously become more relevant in the current political climate, and last night I was made aware of a series of tweets that brought this back full circle for me. There is a link between calling Tottenham fans ‘”Yids” and allowing the abuse to go further. Many people are unable to break down the differences in their heads, as the below examples will illustrate.

Last night, I was sent links to a handful of Tweets from the account of another Arsenal fan. These included jokes about Hitler, people’s grandparents and claims about Arsenal being controlled by American Jews (still no idea what he was talking about). I shared them with my followers to raise awareness and he’s since gone private. I’ve given him the chance to apologise numerous times and he won’t do so. He claims it’s legitimate abuse because he’s only talking about Tottenham. However, I’m going to keep his identity anonymous because a) He’s 18 and I’m putting it down to naivety and b) it really doesn’t matter who this is from – it’s a symptom of a wider problem and embarrassing some kid doesn’t solve that problem.

What am I trying to say here? That we need to start having serious conversations about anti-Semitism and tackle it head-on. We need to call it out wherever and whenever we see it. This isn’t just a problem in politics. It’s creeping in to many different aspects of life and it’s starting to make Jews in the UK feel deeply uncomfortable. I’m the kind of person who usually lets things slide but it’s getting to the point where I just don’t want to do that anymore. I don’t see anyone standing up for me, so it’s time I actually said something.

This is how racism always goes. Low-level, creeping into mainstream thought. From stereotypes about stinginess and ‘Jew goals’ in FIFA, to more blatant things recently like accusations of media control. And it goes unchallenged. It goes unchallenged to the point where football fans can sing about Hitler in public and have a defence. It gets to the point where members of society begin to feel uncomfortable and threatened because of who they are.

Because it isn’t just my responsibility.

It’s yours too. It’s all of ours – just as it’s my responsibility to stand up and speak out whenever I see any kind of racism or discrimination. We’re a society and a community. This post won’t change the world. It’s not meant to. But it’s meant to hit home amongst the people with whom I’m directly sharing this – the football community. We are a community. We’re from all around the world, and so many of us know what it’s like to be that minority that needs others to stand up for us.

So please, let’s take small steps. Stop using the Y word in football. Call out when you hear it, and take issue with people using it, just as you would with the N word or the P word. Stop giving racists something to hide behind. We have plenty of ways to refer to our rivals without stooping so low. It’s a small step but it’s an important and necessary one.

And finally, to the club. To Arsenal – help us stamp this out. If any other form of racism was heard at the stadium, stewards would act. Why are they more concerned with stopping people from standing up than dealing with fans singing the Y word?

We all have a part to play here. We must not keep turning a blind eye.

After a brief exchange in which he’d called me a grass and asked to meet up in person to settle our differences, he attempted to explain himself over DM. I see this as the end result of allowing the nasty parts of the Tottenham rivalry to spill over into something completely separate. It’s shocking to see but I can half understand why a teenager without a properly-rounded view of the situation can grow up with the views below, but it’s still very worrying. Here’s the “other people are worse” exchange: 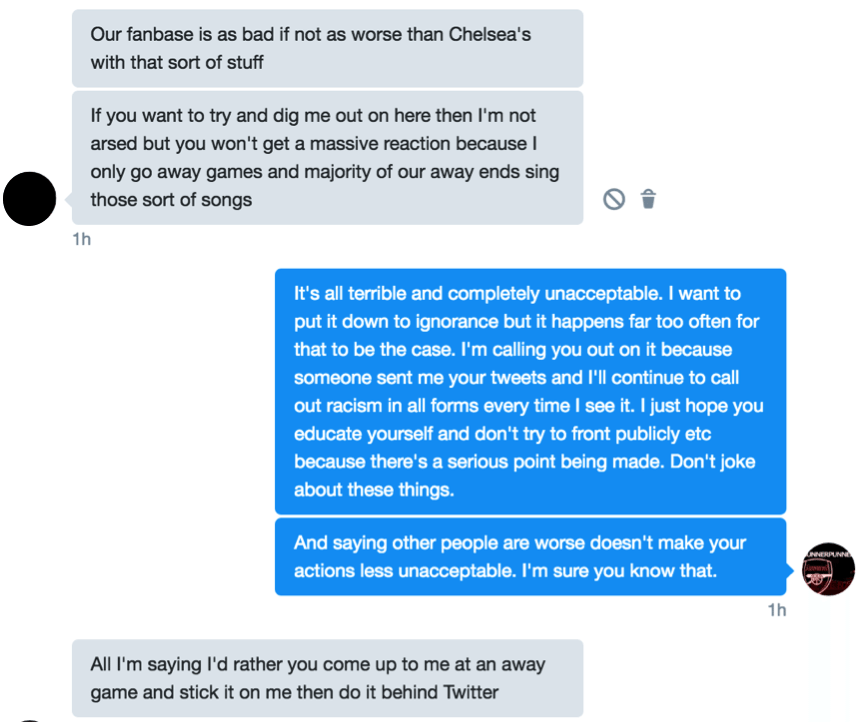 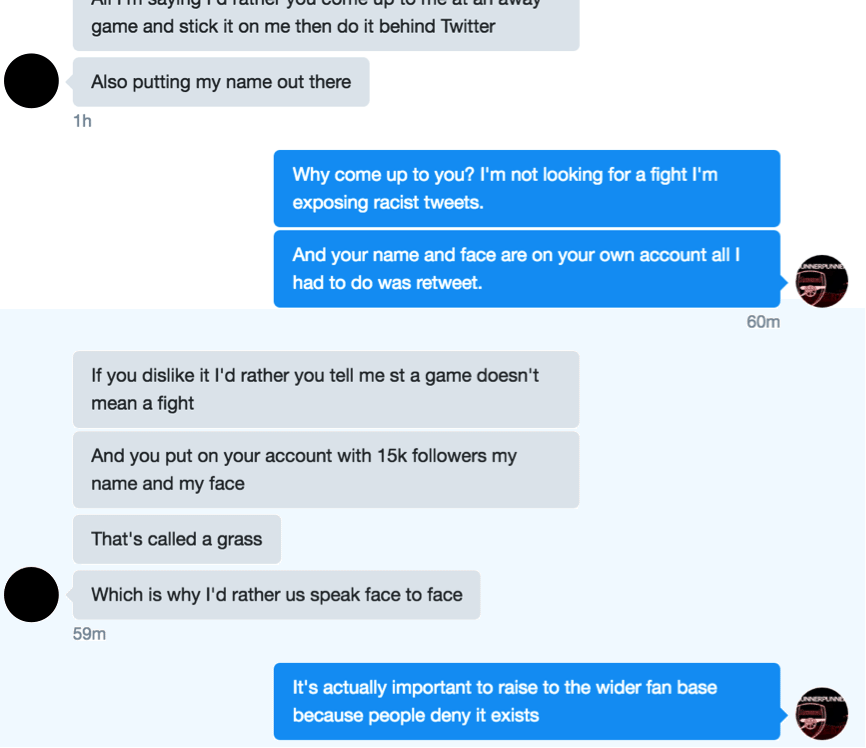 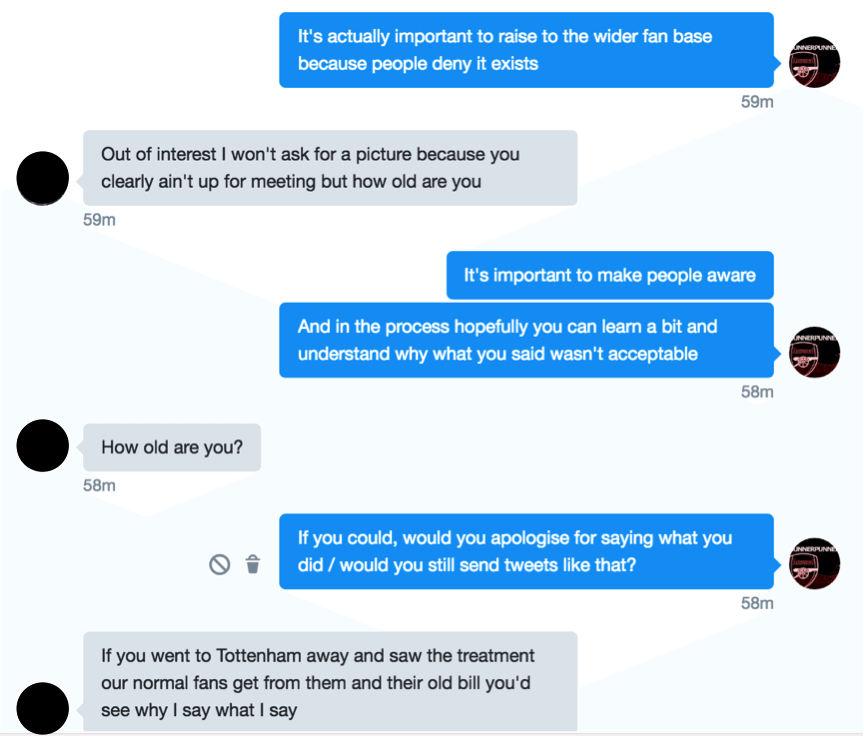 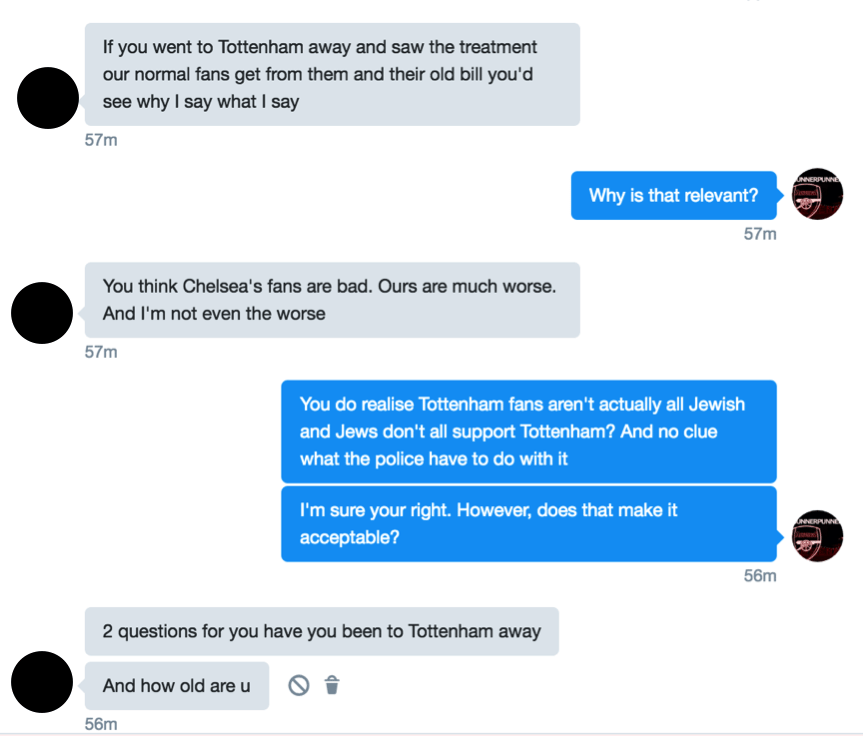 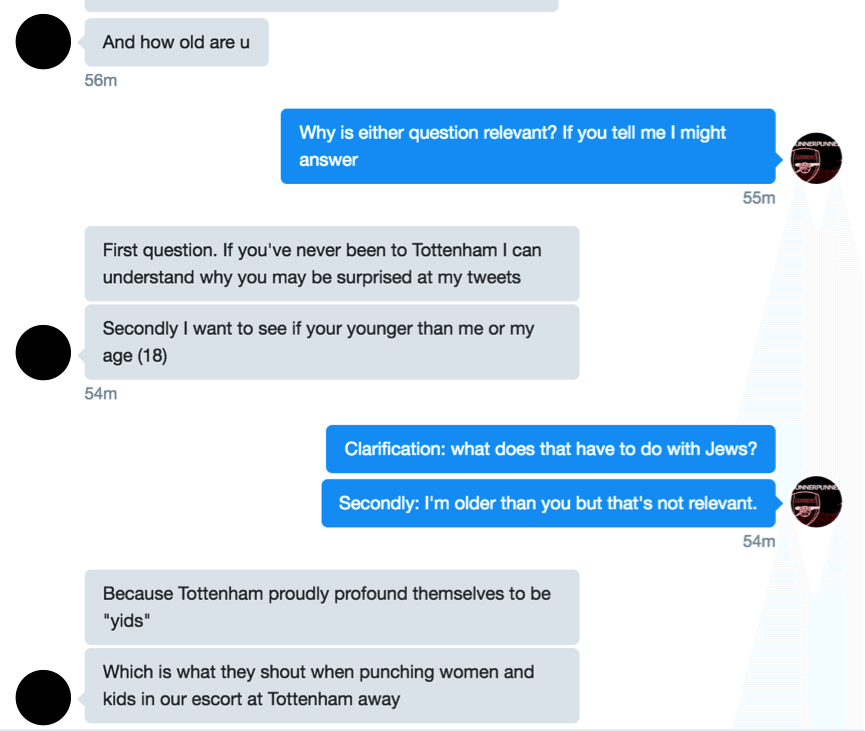 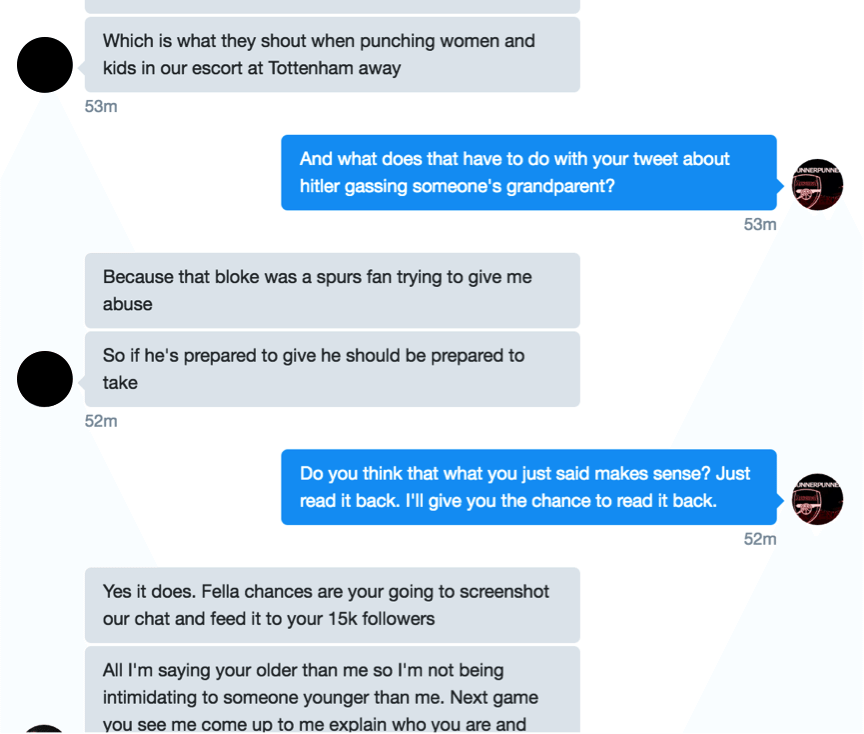 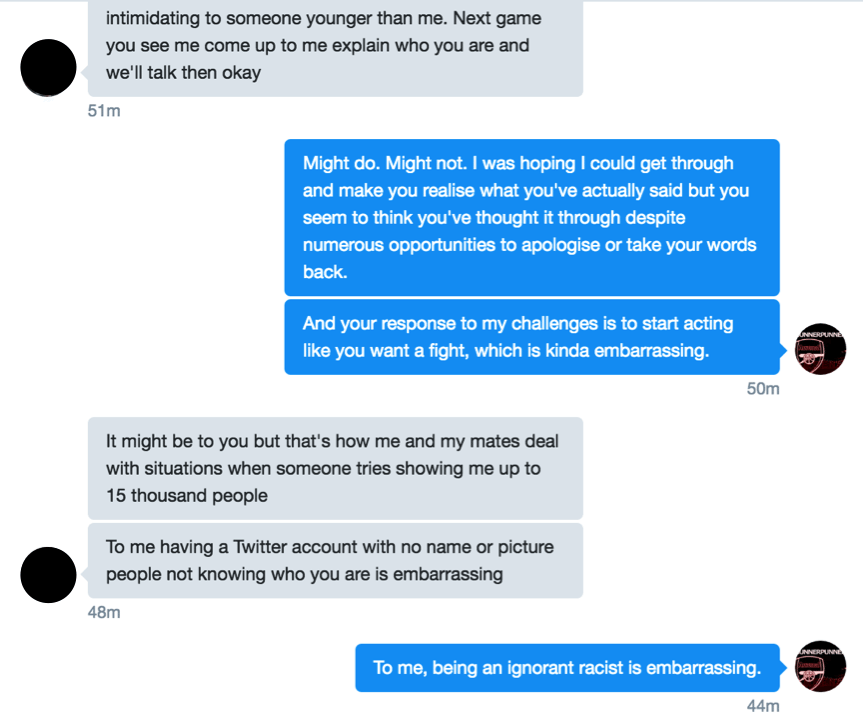 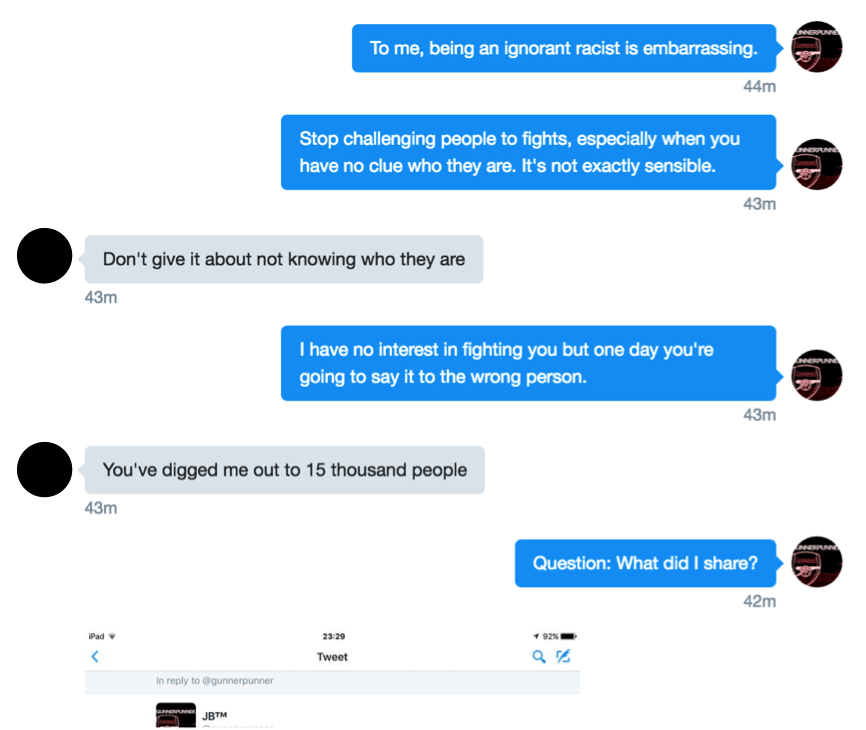 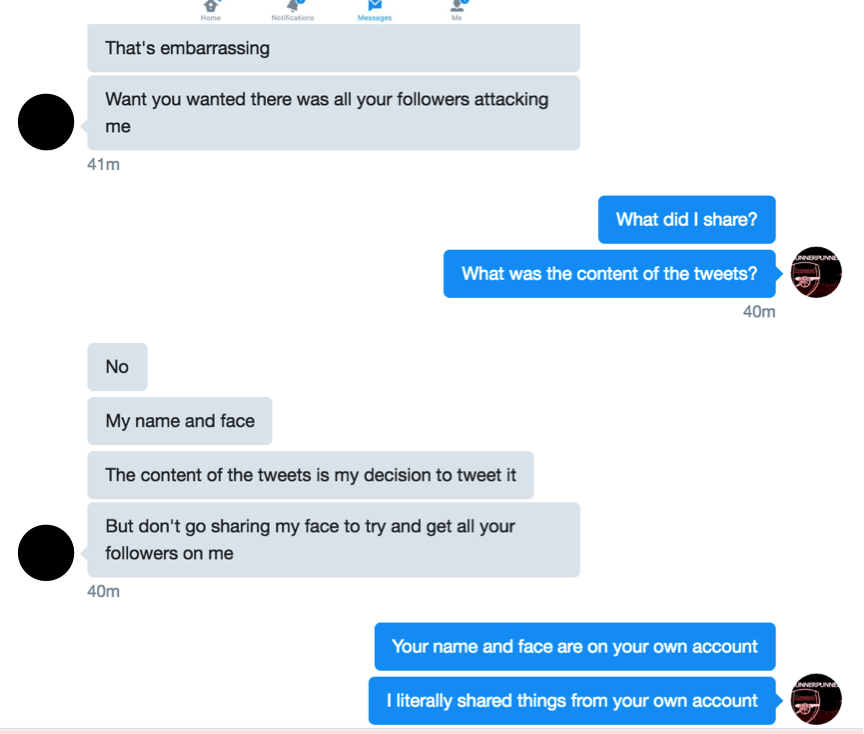 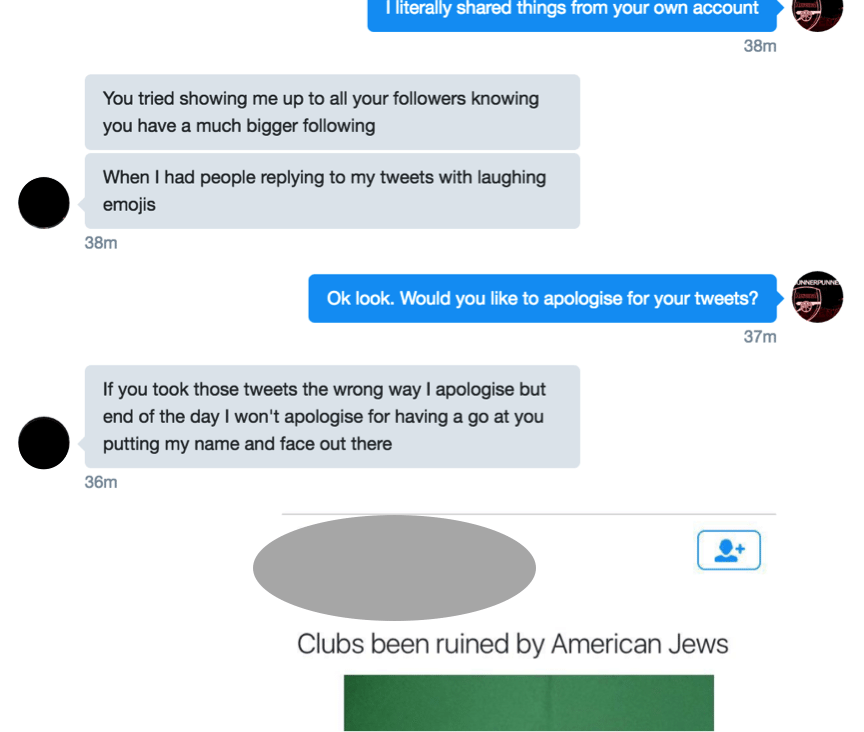 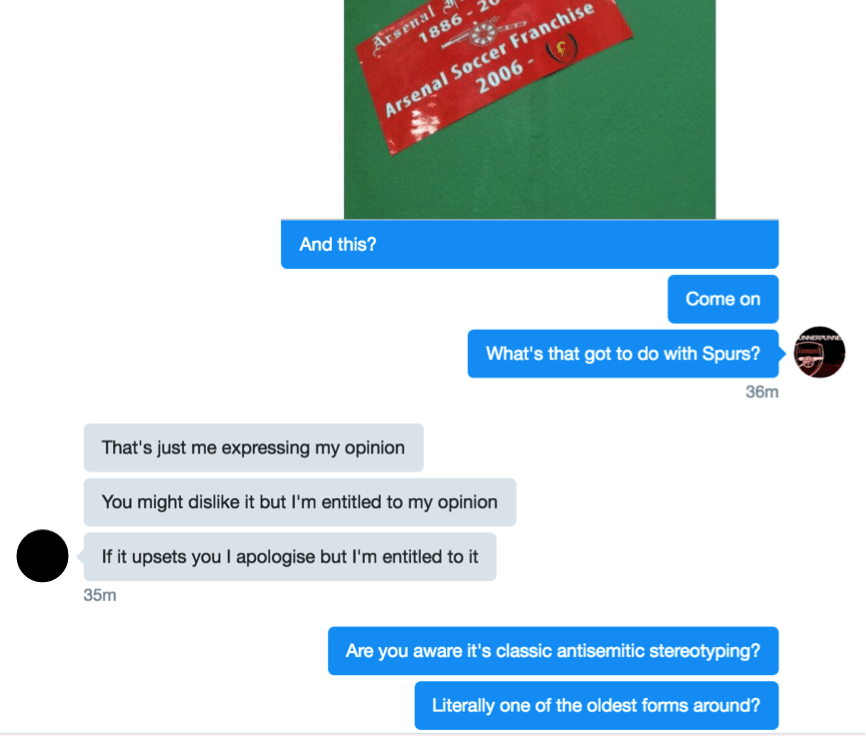 Thanks to JB for writing about what’s an incredibly important and constantly overlooked topic. You can find him on Twitter @GunnerPunner.

Until the end of the season and beyond we can all do more about anti-Semitism, just like other forms of discrimination. Don’t let people get away with it, help educate them, stand up for those who may not be confident enough to stand up for themselves without your backing.

2 years on: The King Is Dead