After last weekend’s collapse against West Ham United, Arsène Wenger has a lot to consider this weekend.

Crystal Palace visit the Emirates Stadium on Sunday afternoon and are likely to be met by Petr Čech in goal, rather than Arsenal’s second-choice goalkeeper David Ospina, who is set to be relegated back to the bench.

In front of Čech there is another choice to be made. Palace can be expected to start with physical former Gunner Emmanuel Adebayor up front so matching him against Per Mertesacker could be favourable, rather than relying on the out of form Brazilian Gabriel again. Mertesacker and Laurent Koscielny have both struggled for form at times this season but have formed a great partnership in the past. Alternatively, why not give Calum Chambers a shot?

Spaniards Héctor Bellerín and Nacho Monreal have been two of Arsenal’s best players all season and should keep their places.

In midfielder, the pair of Francis Coquelin and Mohamed Elneny is unlikely to be broken up just yet. Elneny could suit Aaron Ramsey as a midfield partner but the Welshman shouldn’t be rushed back into the team after a muscle injury and might have to settle for minutes from the bench once more. Santi Cazorla trained on Saturday and Jack Wilshere has been playing for the u21s but neither is likely to be ready yet.

Mesut Özil is a dead cert for the side and will likely be partnered by Alexis Sánchez, who appears to have found some form after a poor season, and Alex Iwobi. Though he gave the ball away in some areas that left Arsenal exposed at Upton Park, the Nigerian also assisted our opening two goals and has dovetailed well with his teammates since being given his first team shot a few weeks ago.

Up front, Danny Welbeck really looked poor a week ago but still (inadvertently) helped Laurent Koscielny to his second half equaliser. Wenger may look to match a physical Crystal Palace defence with Olivier Giroud or outdo them with pacey Theo Walcott but Welbeck is a much more versatile choice.

As the season goes on and Welbeck gets closer to full fitness it becomes clearer that there isn’t necessarily space for both Walcott and Giroud in the Arsenal squad. 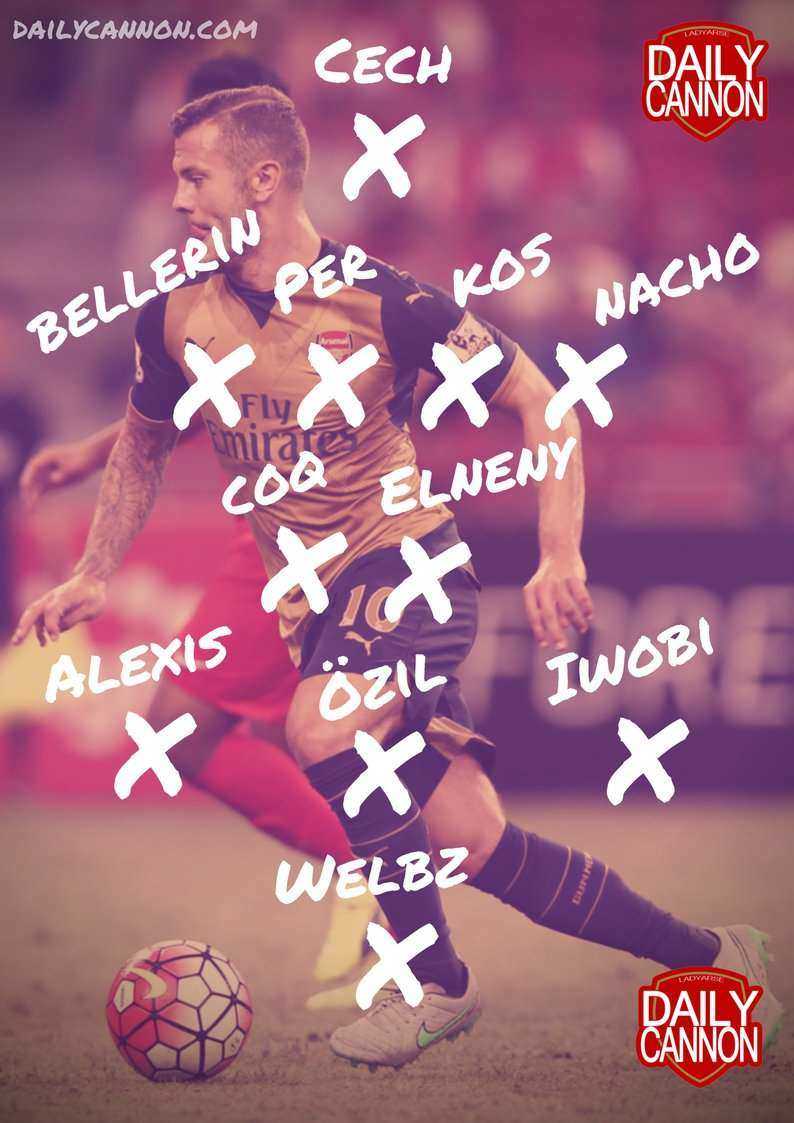 7 changes: How Arsenal could line up vs Sheffield United

Xhaka and Saka to return: How Arsenal could line up vs Slavia Prague

Pepe to start: How Arsenal could line up against Liverpool

Lacazette to start: How Arsenal could line up against West Ham United

Pepe and Willian start: How Arsenal could line up vs Olympiacos

2 changes: How Arsenal could line up vs Tottenham Hotspur

Arsenal 23yo admits the door is open for a summer move

Contract extension for David Luiz won’t be impacted by surgery