Almost three years on from Arsenal bidding for Luis Suárez, plenty of people don’t seem to understand the whole thing and it’s infuriating.

A scenario which has been twisted and misinterpreted over and over again, Jamie Redknapp managed to do something incredible on Sunday afternoon: he got it even more wrong than everyone else has managed to get it.

Live on television, Redknapp said Arsenal didn’t sign Suárez because the club weren’t willing to pay an extra pound for him.

And Jamie Redknapp says Arsenal missed out on Suárez by a pound, the worst misunderstanding of that episode yet.

Don’t believe me? Don’t believe that a man paid a fortune by Sky could be that stupid? Watch below from 5:08.

The wrong end of the stick has been grabbed countless times as far as this story is concerned. Redknapp didn’t even pick a stick up on Sunday, he wrapped his arms around a tree in the wrong park. Live on television.

The worst part is that he is a pundit paid by Sky and, as a result, people just sit at home and listen and nod along! Thanks to the happy atmosphere in the Sky studio, Thierry Henry and presenter Ed Chamberlin didn’t even bother correcting or challenging the son of London’s wisest man.

How is that family so well respected in football?

Anyway, for the benefit of Jamie Redknapp and anyone who agrees with anything he says, I thought I’d spell out the whole Suárez thing.

The answer: Arsenal understood Luis Suárez’ contract contained a clause which said Liverpool had to accept any bid over £40m so, obviously, that’s what Arsenal did. The extra pound was not disrespectful. Should Arsenal have bid £41m? No, of course not. Why the hell would the club offer Liverpool an extra million pounds – that would be stupid.

But wait, there are Arsenal fans who ask why the club didn’t just bid £50m or even more. As if that needs answering.

Arsenal did not bid £50m for a player with a £40m release clause for the same reason you don’t hand over a £5 note for a pint of milk and walk off without the change.

If something has a price, that is what you pay. No more. Paying more would be stupid.

Would Arsenal even have Luis Suárez now had they tabled a bid of £50m? Liverpool were contractually obliged to accept the £40m bid so what makes people think they’d have happily accepted more from the Gunners who they very clearly had no intention of selling to.

Was the clause real? Yes, it was. John Henry has admitted it. Liverpool wronged Suárez and everyone involved knows it. 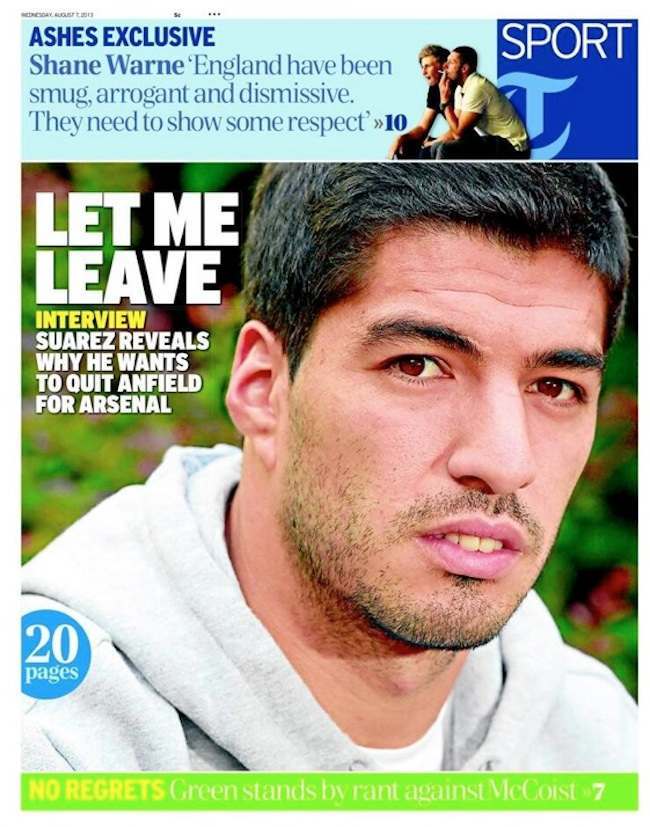 “What we’ve found … is that contracts don’t seem to mean a lot in England – actually, in world football.

Repeat after me: this is NOT Arsenal’s fault. The club submitted a bid that Liverpool were obliged to accept and they didn’t, just as John Henry has admitted(!)

Liverpool wronged Luis Suárez, not Arsenal. The contract was between the club and the player, not the two clubs. As the Reds refused to sell, Suárez would’ve been able to sue them but he opted not to, he stayed, he almost won the league.

Jamie Carragher wrote about this whole situation earlier in the week and criticised Arsenal. Redknapp was then at it on television on Sunday. I hope it’s all a little clearer for them now, and for everyone else who uses the whole thing as another stick to beat Arsenal with.

So far this season, the club, the players, the manager have all done a lot of things wrong. If you’re desperate to have a go at them you should probably choose one of those.

You never know, select wisely and you might even come across as insightful!

@LGAmbrose @DailyCannon You say why pay 45/50? When you have a huge war chest & you lose a player like that for a joke bid, that's why.