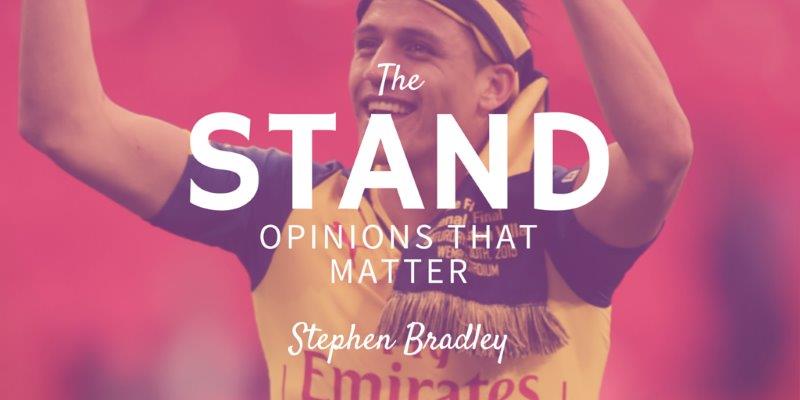 A peculiar thing happened to me during the Tottenham match last weekend.

I was in the pub with the usual gathering of Arsenal fans that appear at my local for games on TV. We were seated in the front row, big screen in front of us, a couple of Tottenham fans to the right of us, bar to the left.

Everyone knew each other, friendly banter was being tossed in all directions; it was grand.

Then, just as the match started, a man whom I would guess is in his mid-thirties, wearing an Arsenal shirt from 2008, walked into the pub and stood up against the bar. For the next forty minutes, non-stop, he berated Aaron Ramsey.

Every swear word that I had ever heard, and a couple of new ones thrown in, were aimed at the Welshman. It was a staggering display of contempt.

Having an opinion on whether a player is good enough is one thing, but this was different.

This was almost a personal vendetta.

It was surreal to see Ramsey on the screen making a good pass, only to hear a booming voice beside us shouting “F***ing stupid c***, never does anything f***ing right, I keep telling ye he’s f***ing useless, it’s only a matter of time before he f***s up, trust me!”

Seconds after he uttered the above quote, Ramsey back-flicked a mis-hit Hector Bellerin cross into the Tottenham goal, and Arsenal were winning. After the initial delight in seeing us score, everyone was startled by the sound of a glass breaking on the floor, followed by some loud swearing and a door being slammed.

The bloke who had been slating Ramsey all game had finished his pint, thrown the empty glass to the floor, and then started to berate Ramsey for making him look like an idiot, and stormed out of the pub.

It was an incredible fit of pique, displayed at a time when an Arsenal fan should, theoretically, be at their happiest.

I bring this up because it is a prime example of what is occurring with increasing regularity amongst the Arsenal fan base.

Arguments and opinions are being espoused, not because that person believes what they are saying to be true, but because they want to be seen as being in the right.

Take ‘that‘ banner, for example

If an Arsenal fan cares so deeply about Arsene Wenger being the wrong man for the manager’s job that he is willing to go to the hassle of hauling around a 10ft x 4ft banner to Hull and back just so he can vent his frustration, then he has every right to unfurl that banner after the game.

A 4-0 win over a Championship side resting its best players will convince no-one that Wenger is better than they previously thought he was, and whilst the timing may seem a little jarring to those who want to just celebrate the win, that fan was hardly going to go to all that trouble of bringing the banner into the stadium and then not unfurl it, was he?

However, the issue here isn’t the banner.

The issue is that many fans are using that banner as an excuse to say that they’re right to want Wenger out of the club, and to be seen as being right.

They’re just looking for something that validates their opinion, and will use anything that supports their argument as a tool.

To see this at work on a larger scale, take a minute to look at #pickmetwitter.

As soon as a celebrity posts an opinion on something, watch their mentions fill with those looking to be picked out for being in agreement with that person.

Lots of people look for validation of their opinions from the actions of others, instead of the conviction of their thoughts. It’s an accentuated occurrence of the feeling we all get when we say ‘I told you so.’ To someone who disagreed with us, that fleeting sense of superiority that comes from being right.

This is why the Arsenal fan base is so fractured, because there are people on both sides of the argument that are having one of the most important debates in the history of this club, purely in an attempt to prove the other side wrong.

It doesn’t actually matter to them whether Wenger stays or goes, it only matters that you agree with their viewpoint on it.

It is a small, yet crucial distinction.

We’ve seen this week just how powerful the fans’ voices can be when the Premier League decided that fleecing the away fans for every single penny possible was something that needed remedying.

For the first time in its 24-year history, clubs in the Premier League as a whole took one look at a big pile of cash that they could keep for themselves, and said “Nah, you’re fine. We don’t want (some of) it.’

When Arsenal fans are in unison, they can enact change.

The chant of ‘Spend some f***ing money!’ was heard at the Emirates after losing 3-1 to Aston Villa on the opening day of the 2013-14 season.

Two weeks later, a cheque for €50m was sent to Real Madrid for Mesut Özil.

If Arsenal fans ever reach consensus on Arsene Wenger needing to leave the club, then whatever that consensus is will happen.

What we have to keep in mind, is that the argument we are making isn’t relevant, it is the reason why people are making it that is important.

Any banner that any Arsenal fan brings to a stadium is irrelevant. It is the reason they brought it is that is key.

The only way to sort out what to do next is to forget about being ‘right’.

We have to get away from the mud-slinging and abuse-throwing aimed at Arsenal fans who try to explain their reasoning for wanting Wenger in or out.

Only then will it matter what a banner says.