Manchester City’s ability to dominate sides with their attacking ability is well known, but they rely heavily on individuals who Arsenal must look out for on Monday night.

Meanwhile, at the other end of the pitch, the Citizens are vulnerable, with their system leaving them vulnerable to the same attacking moves over and over again. Exploit them, and Arsenal will have a great chance on Monday night.

First, though, let’s check out how City will start and what Arsenal have to be wary of. 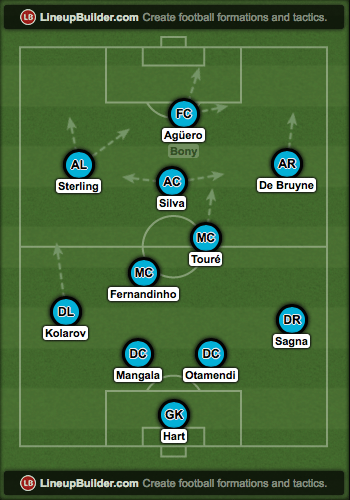 Creator-in-chief, David Silva is the closest you’ll ever find to a Mesut Özil clone. Needless to say, he’s brilliant. Playing as a ‘number 10’, Silva drifts around to find space to exploit. Naturally the most dangerous areas are the half-spaces, so Arsenal will need to remain tight and look to cover players as they move out of positions.

Staying compact, Arsenal starved him of the ball back in January by covering him at all times. It wasn’t about tackles or interceptions, but actually preventing him getting the ball in the first place. If Mathieu Flamini and Aaron Ramsey can’t manage that on Monday, it could be a long evening.

If anyone asks you where the half-spaces are… pic.twitter.com/BgIIRbGMU3

Not only does Silva penetrate these areas wide of the centre-backs with his passes, he manages it with his runs too. A recent goal against Borussia Mönchengladbach saw Silva burst just inside Raheem Sterling before thrashing the ball into the roof of the net. It’s an area City regularly look to infiltrate the box from, and Silva is the key.

Since Sterling’s £49m move in the summer, he and Kolarov have formed an incredibly dangerous partnership down City’s left-hand side. Overlapping fullbacks have been an enormous threat for the Citizens over the years, allowing Pablo Zabaleta to excel. Now, though, Kolarov is their biggest threat from out wide.

A superb dribbler, Sterling comes in from the left and forces anxious defenders to back away from him. Then, just as Kolarov arrives to flood the channel, Sterling will lay it into his path perfectly.

It was a horrible afternoon at Stoke for Manchester City, but in both of the above instances Sterling attracted defenders to him before releasing Kolarov, who hit the post.

The relationship between the two players and the threat of Kolarov has seen him average more shots per 90 minutes than all of City’s players other than strikers Sergio Agüero, Wilfried Bony and attacking minded midfielders Yaya Touré, Raheem Sterling and Kevin De Bruyne this season. The Belgian is joined by David Silva and Jesus Navas as the only players to create more chances per 90 minutes than Kolarov.

Héctor Bellerín will have a very busy evening as City look to use this weapon yet again, and whoever plays ahead of him – plus the central midfield pairing of Flamini and Ramsey – will need to make sure he isn’t outnumbered when the visitors come forward.

Less of a tactical observation, but these two players are incredible runners above all else. Both Agüero and Touré can, on their day, do absolutely anything in the final third. Agüero’s movement is particularly excellent, while Touré will drive into any space Arsenal leave around the area.

Along with Kevin De Bruyne or even Jesus Navas, the incredible running and technical ability of these players make City a huge threat on the break.

Once again, the key to stopping them will be Arsenal’s compactness and organisation to ensure gaps don’t appear.

That isn’t to say that City are flawless offensively, far from it. Silva will want to play around the box and in the channels, meaning the deep midfield passers of Fernandinho and Yaya Touré are left to build play. They’re often sluggish in doing so, not stretching play at the right times and struggling to set a tempo that unsettles opposition defences.

When pressed, the midfield and the backline look shaky. Lacking a superb passer of the ball, or a defender that thinks quickly enough to take advantage of the gaps left by pressing, City are more likely to play into trouble than stretch teams who put them under pressure.

Without a strong passer from deep, Arsenal may well choose to press City high up the pitch and force them into turnovers, much like home games against Manchester United (3-0) and Liverpool (4-1) in the past year.

Defensively, the City system has significant flaws. When plans are executed well, which is usually when captain Vincent Kompany is available, the defence can look formidable. However, they rarely are and the team will be without Kompany on Monday.

They don’t concede many shots on goal, but when City do look open it comes from two things:

Both Fernandinho and Yaya Touré are superb, but they’re box-to-box midfielders. Touré in particular is often caught upfield and fails to get back into position too quickly.

This can lead to Manchester City’s defenders attacking the ball too high up the pitch, exposing the entire team to wide open spaces in behind. Defenders become attracted to the ball, and other members of the opposition are free to make dangerous runs.

Yaya Touré is a particular issue here. A superb athlete, but you can’t help but get the impression he gets carried away with wanting to influence play offensively, rather than sticking to his defensive duties.

When City’s midfielders do bother defending, they (and I’m mainly picking on the temperamental Fernando here) go running after the ball foolishly, leaving even more space between themselves and the defence.

As spaces open, defenders commit and runners go beyond them. It’s not a one-off.

The midfield is one issue, forcing defenders to act proactively.

Another is with the defence itself and its offside line. It’s effective to play a line on the edge of the box as soon as teams approach, but with runners like Theo Walcott and Aaron Ramsey, and a passer like Mesut Özil, Arsenal could rip this City defence up.

Imagine Özil on the ball, Ramsey coming into the box and Walcott up front or drifting from wide. Leave Olivier Giroud offside as much as you like, if City don’t switch on to the new threats Arsenal will cut through them.

As the line is set on the edge of the box, the Manchester City midfielders simply don’t take enough responsibility with the players running from deep.

The above example is the biggest mess of all. Mangala is focused on getting the line to the 18-yard box, so misses the run of Roberto Firmino behind him. However, Sagna and Kolarov don’t come up so there can’t be an offside anyway. Firmino shouldn’t even be an issue for Mangala, but Fernando (circled with Firmino on the edge of the D, left picture) stands still as the Liverpool man makes his run. Likewise, Philippe Coutinho is covered by Kevin De Bruyne and Sagna. The former just jogs off without telling Sagna where De Bruyne is.

Coutinho receives the ball and squares it to Firmino. Goal, game over.

Manchester City midfielders don’t take enough responsibility defensively, meaning the backline have to cover runners, aim to win the ball and focus on setting their strike line all at once.

Runners from deep, timing their movement well, tend to make this City system look dreadful and Arsenal should target that with Aaron Ramsey and Theo Walcott in particular. Both players have great movement and desire to go beyond the defensive line, and can use it to their advantage against this defence.

There are a lot of dangerous things about City which have to be prevented, but there’s even more about them that can be exploited at the other end of the pitch. Arsenal have the chance to give us a very merry Christmas indeed.