Go to the middle of North London and ask a thousand random strangers who Arsenal’s best player is.

Most will say Alexis Sanchez, a good two-hundred or so will say Mesut Özil and there will be the random lad who will say Jack Wilshere, when fit, drives the team forward with his passion (pashunnnn!!!). One name you likely won’t hear is Santi Cazorla.

Santi Cazorla, the fleet-footed, ambidextrous Spaniard that he is, rarely grabs the headlines. Gone are the days when he was the most-prolific goalscorer from outside of the box in all of Europe…

…but just look at what he was capable of! The ball breaks forward for the former-Malaga player, who feints from his right-foot, onto his left-foot to confuse the entire West Ham defense, before unleashing a darting, dipping and damaging long-range missile into the back on the net…

This was back in the 2012/13 season, his first for Arsenal. He was at his most prolific back then, not only scoring 12 goals, dishing 11 assists and carrying Arsenal during a difficult period, but he did it all without taking a single penalty! 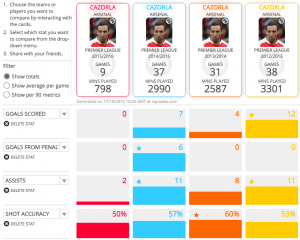 His critics, and there are more than a few within our own fanbase, have been quick to latch onto the fact that he no longer scores any goals. In fact, since his debut season, he’s scored a paltry 5 non-penalty goals…despite taking 205 shots. Over half of his shots (119) have come outside of the box, but that still means he’s taken 86 shots in the penalty area. Surely for a player who can do this…

…should be capable of scoring from within the penalty-box.

So what happened to Santi? Is he bereft of confidence? I doubt it, because he still does audacious s**t like this!

But, alas, Father Time remains undefeated. Cazorla turned 28 just five months after arriving at Arsenal. He already wasn’t the fastest, most powerful player, so any loss of explosion is difficult to bare. His passes may still fly across the pitch with ease, but his shots just don’t have the same punch.

Since his debut season Cazorla has had to find new ways to influence proceedings. Shunting him out to the wing didn’t work because he cramped space by coming inwards too often. Alexis has the same tendency, but he has the devastating ability to blast teams away from distance. Cazorla couldn’t do that, obviously. So instead of being a shot-monster in and around the penalty-box, he’s become a deep-lying playmaker. Since that move, Arsenal’s results have been on an upwards trajectory. Özil may be propped up as the team’s most influential playmaker, but I daresay it’s Cazorla. 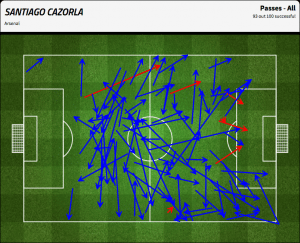 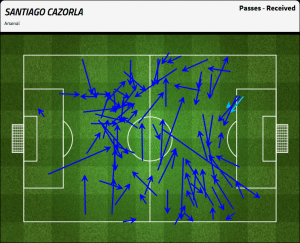 Özil has it comparatively easy, simply finding pockets of space in between the lines of the defence and letting Cazorla do most of the heavy-lifting in the final third. As you can see, using FourFourTwo’s StatsZone app, almost everyone of Santi’s passes are across or forwards. Once Arsenal are in the final-third, almost every pass towards Cazorla is inwards. He’s constantly making himself available for attackers and wingers, bending and bending and bending the defense until it breaks. And break it did today against Watford:

Özil got the assist, Alexis got the goal, but it was Cazorla, receiving a short, lateral pass from Özil who broke Watford’s lines (you can see when he plays the pass that five of Watford’s defenders aren’t aligned properly) and gave Özil the opportunity to slalom into the heart of the box.

He’s no longer grabbing the headlines like he once did, but Cazorla’s influence has never been greater.