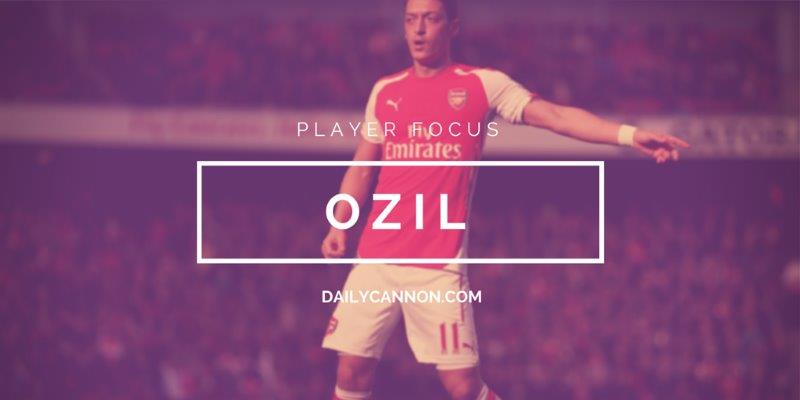 Confidence will do wonderful things for a player.

There was one moment in the second half of the game against Everton which perfectly encapsulated the confidence coursing through the veins of one Mesut Ozil, in a game which he ran from the first minute to the last.

A sexy one-two with Olivier Giroud saw Mesut approaching the box from wide. Cutting inside, he drove a low shot across Howard, which struck the post and rebounded away. Six months ago, Ozil doesn’t even take that shot, let alone get away a clean and powerful strike which cannons off the bar.

Delivering when it matters

Insufficient end product is often one of the things he is picked up on – £42.5m means people expect an assist every match even if that isn’t your game – and Ozil has taken a lot of criticism for not providing enough goals or assists, even when he has been bossing matches.

Recent weeks have seen a decided upturn in his reportable numbers, and commensurate praise. He clocked up another assist with a delightful cross which Giroud duly turned it in, and generally pulled the strings. Let’s not talk about the chance he fluffed in the first half which wouldn’t have counted in any event – perhaps he knew!

His all round game was excellent, and saw him play the ball around the Everton defenders with incisive passes as well as dribbling past men with seeming ease. A personal highlight was a sublime reverse pass to play the onrushing Alexis in behind the Everton defence in the penalty area. Most players don’t have the vision to see the pass or the technique to execute. Mesut Ozil has both.

Having played the full match in midweek, it was also impressive to see him still making lung-bursting runs in the final minutes of the game. His post-bound shot came in injury time, following up on his added time goal midweek, and it seems the lazy tag has finally been cast aside, despite never having any accuracy.

Alexis and Oxlade-Chamberlain were flagging long before their substitutions, but Ozil ran into the ground for the team, and he was potentially even stronger the longer the game went on.
When Arsenal are under the cosh, as we were for much of the last 15-20 minute as legginess set in, an outlet is invaluable. Giroud had such an impact in the Bayern game, but it was Ozil who offered the willing running and the exceptional movement to stall Everton attacks.

More than just an outlet

He has an ability to ghost into space and occupy areas where it is easy for his teammates to play a percentage ball into the channels for him to chase. Superb control combined with a sudden burst of acceleration allow him to occupy a couple of defenders in such situations, and we also get treated to the odd trick, which he typically saves for the scenarios where he has no alternative to escape.

The combinations with Alexis, Giroud and Cazorla in particular were highly enjoyable in the first 45, and when the going got tougher in the second half, Ozil turned in a different but equally valuable style of performance which saw us over the line in a game we’d have probably drawn this time last year.

His entire game today was frankly on a ridiculous level, head and shoulders above anyone else on the park. Who says Arsene can’t sign good players any more?

Promising signs indeed, and he’s still only 27. How can you not get excited about what the future holds?